Lou Vs. the Lorax 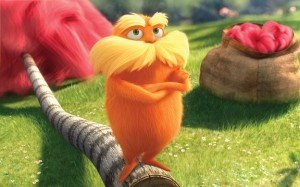 Lou Dobbs Attacks Dr. Suess For ‘Indoctrinating’ Children
In this recent installment of the popular Fox News segment “The Unmentionables”, pundit Lou Dobbs attempts to convince viewers that Hollywood-produced children’s movies of recent times, specifically The Secret World of Arietty (based on the British, mid-century children’s novel The Borrowers by Mary Norton)and The Lorax (based on the picture book by Dr. Seuss), are rife with “liberal media bias”. Dobbs makes the argument that The Secret World of Arietty, whose story revolves around a miniature family scavenging the leftovers of full-sized “human beans” to create and sustain a secret world within our world, implicitly supports a sort of communistic mentality of involuntary wealth redistribution. He even draws a direct correlation between the animated film and the Occupy Wall Street movement, which he seems to view as an insidious coalition, though the protests associated with Occupy have largely pushed broader contemporary issues of governmental corruption in lieu of any well-defined agenda. Dobbs goes on to criticize the second children’s film, The Lorax, for extolling the virtues of environmental awareness in the attitude that this message is anti-business and thus counter-conservative.

The Lorax tells the story of the titular creature, protector of animals and plants, who persistently warns the “Once-ler”, an ambition business owner who uses a certain kind of tree under the protection of the Lorax to make “Thneeds”, against the long-term effects of the factory owner’s pollution and over-consumption of the special trees. When the “Once-ler” irresponsibly ignores the Lorax’s warnings, environmental and financial ruin ensues. Although it can be said with confidence that the message of The Lorax is pro-environment and that the environmental movement has been long associated with “liberal” political thought, the moral of the story can hardly said to be more political than practical – after all, the business owner in the story was unable to continue his business due to the unsustainability of his pursuits.  Awareness of resource limitation could easily be touted as a pro-business concept from this perspective.

On the other hand, the book upon which The Secret World of Arietty is based was published in 1952, decades before any inkling of the Occupy movement and in the midst of the Second Red Scare and anxiety surrounding the influence of new media such as television and comics on children. This story in particular is preceded by many and varied apolitical fairy tale creatures surreptitiously inhabiting the human realm of existence.

Taking these things into consideration, the sort of conjecture about the indoctrination of children through film shown in this news segment reveals itself as alarmist and ill-founded. Critiques of children’s media in a similar vein are far from uncommon, exemplified by the controversies surrounding the messages of tolerance incorporated into the classic television program Sesame Street, beginning with its advent in the 1960s. It might be useful to ask ourselves: to what degree are people in the news media who preach about the indoctrination of children actually investigating causal relationships between viewing certain programs or films and children’s behavior? Or will pundits like Dobbs someday be seen in the same light as Dr. Fredric Wertham of Seduction of the Innocent infamy?