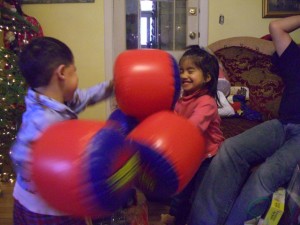 When I was younger my house was always chaos, mostly because I had six other siblings. Of the five girls in my family (fours sisters, two brothers, plus me equals seven), I was always labeled the tom boy and playing rough came with the title. Because of my love for rowdy play and wrestling, I remember receiving one of my favorite Christmas gifts of all time, the Sock’em Boppers!

Sock’em Boppers were inflatable boxing gloves that children would blow up and place over their fist then proceed to punch each other. They were very popular among kids of the 90’s but were produced in the 70’s. They resurged in the late  90’s with a slightly different name, “Socker Boppers.” They can still be purchased at any major toy store and can even be bought on amazon.com for around thirteen dollars.

Despite the unavoidable fight that came with every purchase of this toy, the commercial ads depicted Sock’em Boppers as nonviolent play and even used the slogan “more fun than a pillow fight.” Honestly, I can remember on numerous occasions being “socked “in the faced with in one of these and it was not always pretty. Of course this toy was supposed to be played in the presence of adult supervision who could advise the “not in the face” rule but let’s get real; when two kids are alone playing with these oversized fists of fury it can get pretty brutal.

So who was it that said television, games are what make/made children wiolent?

Lynn Spigel, author of “Welcome to the Dreamhouse: Popular Media and Postwar Suburbs” argued that “so long as the young are protected from certain types of knowledge” they will stay an “innocent and pure” youth (146).  By “certain types of knowledge,” Spigel meant television. But while television may have been the source of commercialization of toys such as Sock’em boppers, the act of playing with this toy was the form of violence that altered the “innocence of youth”. This leads me to another reading that blamed the rotting of children on Television and technology, Ray Bradbury’s “The Veldt.” Bradbury’s story also creates the technology in George Bradley’s house as the antagonist. The conclusion of the story outlines the children’s vicious act in forcing their playroom to eat their parents.

In the end, I am simply arguing that while television, video games, and other technology may have some violent affect on the nature of children; let’s not forget that playing outside with a pair of Sock’em Boppers can force children to think and act just as violent. Rowdiness and aggression is many times an inherent nature of some children, and ultimately as a child, how they release that inherent nature of rowdiness lies in their own hands, with slight parental supervision of course.

Here’s is a commercial ad from 1997 of the Sock’em Boppers.

Just a quick side note, I find it funny that there is not one single girl in this commercial.

Tags: Childhood, technology, Television, toys, Violence
From: Archive of Childhood
No comments yet