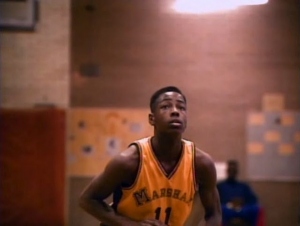 image of Arthur Agee from didyouseethatone.com

In the documentary “Hoop Dreams,” the lives of two teenage boys, Arthur Agee and William Gates, are followed throughout their high school basketball careers. Throughout the documentary it is apparent that many factors outside of the boys’ control greatly affect the way their lives pan out. The main factor that made the difference between the boys lives, was when Arthur had to drop out of St. Joseph’s private school because his parents were unable to afford the tuition. Because Arthur had to go back to his school that was in his neighborhood in the projects, this ended up making his life much more different than William’s. William was fortunate in that he had people offer to help pay his tuition and he was able to stay at the elite private school. The director, Steve James, does a great job of showing how different the boys’ lives are because of the different schools they attend. Because of the incident of Arthur having to switch schools, it is shown how impactful events where the boys’ are unable to show agency are.

While Arthur and William may have had the ability to decide how hard they would work for their goals, Steve James makes it obvious that because of the school William is able to attend, he is given more chances to succeed. An example of this is when William is trying to make a certain grade on the ACT so he can be admitted into the college of his choice. Because William is surrounded by supportive educators with the resources to help him at his new school, he is constantly being told by others what he needs to do to get into college. He is also provided with tutors to help him and adults who encourage him to take the ACT over and over again until he finally makes the grade he needs to. In Arthur’s case he is not so lucky. At his school he does not have people constantly telling him what he needs to do to get into a university, nor does he have the same resources available to him that William does. It seems like if Arthur wants to succeed he has to try a lot harder to figure things out for himself, while William is basically handed what he is supposed to do to be able to get into college.

When thinking about this documentary is strange to realize how the boys’ basketball abilities were what the determining factor in how their lives turned out was. Decisions were made for them based on these abilities and in turn so many other aspects of their lives were affected. Overall in this main incident, James portrays the boys as having little agency.