Barbie or American Girl, and Does it Matter?

In Andrew J Rotherman’s article “What Barbie Could Learn From American Girl,” for Time he claims that American Girl is a wholesome alternative to Barbie’s “vapid sexuality.” He supports the historical back-stories that are paired with each doll, claiming that Barbie will be better if she could teach young girls something.

Rotherman and Elizabeth Chin, author of Purchasing Power: Black Kids and American Consumer Culture, agree on one thing: toymakers like Mattel, maker of Barbie and American Girl, have the goal of empowering young girls, though Chin specifically concentrates on girls’ self esteem in “Ethnically Correct Dolls.” I think Rotherman and Chin’s agreement stops here, however.

Rotherman argues that when Barbie is shown as an astronaut, veterinarian or Marine Corps drill instructor, this image of women in powerful and successful positions is negated by the unrealistic way “Barbie is still off to her hot tub or other age-inappropriate activities.”

I think Chin would argue that it doesn’t matter what Barbie does; it’s all foreign to the kids she studied in New Haven who wanted dolls that were like them, familiar to them.

“They wondered why there was no fat Barbie, no abused Barbie, no pregnant Barbie” (369). 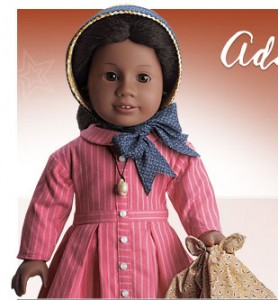 American Girl has Addy, an African American ex-slave in the Civil War era. While the history education that comes along with the dolls is important, Chin would probably point to the ways through which the girls she studied can create the familiarity they crave “through their own imaginative and material work.” They braided the dolls’ hair to “bring their dolls into their own worlds” (369). Dolls become part of the kids’ lives. The stories created around the dolls revolve around what the child knows, not the story that Mattel created around the doll.

Chin argues that having ethnically correct dolls isn’t really that important, or doesn’t make much of an impact because the low income communities that could benefit from these dolls don’t have access to the dolls physically and financially. It seems ironic then that Rotherman, co-founder of a non-profit that deals with low-income communities, believes that American Girl is a better alternative to Barbie when it is so much less accessible to the communities he is trying to better.

Tags: American Girl, barbie, Chin, Dolls, empowering girls
From: In the News
No comments yet