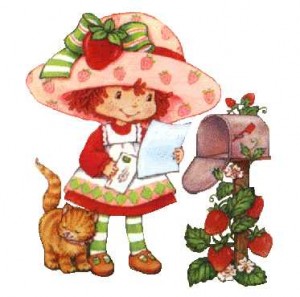 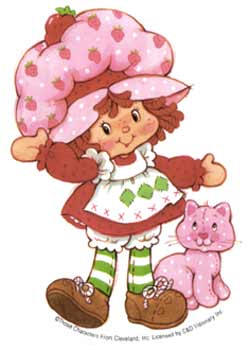 The first episode in the series serves to introduce all the characters, whose designs and names are coordinated around different kinds of berries and treats. There are songs. It’s incredibly saccharine. Strawberry Shortcake, the titular star of the cartoon and the feature character in the Strawberry Shortcake toy line, is having a birthday. A misunderstanding occurs when all of her friends desert her in order to plan her surprise party. The villain called the the Purple Pieman who seeks to steal the strawberries the berry kids grow delivers a magical watering can to Strawberry Shortcake and her friends in the guise of a birthday present. The watering can spouts water from nowhere, but when the kids can’t find a way to stop the flow, the can floods the entire valley where they live. They are forced to harvest all the berries and take them to the Porcupine Mountain (a stereotypically stormy and clouded cliff covered in strange spikes) where the villain lives. The discovery is made that the infant character named Apple Dumpling has been carried off to the castle in one of the berry carts by mistake. In the end, the baby is rescued and the berry gang forges a friendship with the Purple Pieman under the condition that he stops trying to steal berries and instead brings his pies to the berry market, an important event in the little village. Thus the show ends in a message about friendship and forgiveness, a direct contradiction to Cross’s claim that PLCs cannot contain lessons that apply to real life.

The world of Strawberry Shortcake is a wonderland. Inanimate objects and non-sentient entities, like the over-sleeping alarm clock and the narrating sun, are anthropomorphized. The berry village where the characters live is a children’s playground and all the characters are baby-doll-like caricatures of children. The story seems to takes place under the pretense of a fantasy utopia without need of adult supervision. Even the only infant character, Apple Dumpling, is cared for by no one in particular among the larger body of 6-7 year old berry pushers. The baby cannot talk, but is inexplicably able to write her thoughts out in notes with complete sentences. The only adult depicted is the buffoonish antagonist, the Purple Pieman, whose most insidious acts are limited to stealing berries and making terrible puns. The creators of the show have built a universe for actual kids to imagine their toys inhabiting. Through this narrative mode, the PLC appears to expand upon of the idea of guided play, often associated with the excess and materialism of modern toys, explored in our recent readings. The entire environment in the narrative is a mixture of exaggerated or fantastically disproportionate natural features and structures, primarily made of desserts and fruits.

While the world of Strawberry Shortcake is incredibly fanciful like Cross’s other examples, it does appear to have a certain set of physics and rules all its own. The creation of a fictional universe requires logical constraints to make it functional within a narrative like a television program. Cross’s argument seems flawed in this respect, as the whirlwind of unrealistic imagery in PLCs like Strawberry Shortcake do not necessarily translate into pure stimulation by distraction. However, in his defense, the utopian nature of these worlds where there are no serious conflicts or obligations and the characters appear to go about their lives doing whatever makes them happy lends to an episodic aspect that’s obviously absent from reality. Aspects of reality and real media are even parodied in the show, i.e. the “Tom and Berry” cartoon on Strawberry Shortcake’s TV set.

A collection of the cast of Strawberry Shortcake character dolls.

But how much more fanciful and frivolous is compared to older, lower-budget children’s programming like The Howdy Doody Show? Could the most striking difference in the example of Strawberry Shortcake be the absence of an adult “anchor” to every day life? We must consider that animation as a medium saw a surge in popularity with the 1980s wave of PLCs, presumably because it allows just the sort of unlimited world-building and effects necessary to bring to life characters like those in Strawberry Shortcake, The Care Bears, and My Little Pony. By the advent of these shows, animation was re-branded from its roots in the popular consciousness as a medium meant almost strictly for children. This consideration would seem to support Cross’s argument by underlining the growing divide in children’s culture between children and adults: an emerging “us and them” mentality that can be observed more recently in cartoons like Codename: Kids Next Door. PLCs have likely contributed through the insular tailoring Cross identifies to children’s dreamy clubhouse dreams of a world exclusively created for and inhabited by children. The question of whether or not modern children are made less in touch with reality and, by extension, adults through the influence of PLCs is much harder to answer.