He-Man the Master of the Universes 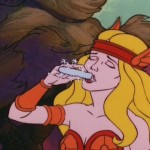 Ileena Drinking the magic potion. He-Man the Master of the Universes Season 1 Ep 16

I recently watched an 80’s episode of the show He-Man the Master of the Universe called “A Friend in Need” on Hulu.com.  In the episode, He-Man’s friend, Ileena, lacked self-confidence and wanted to be stronger and braver. Her weakness was vital to the evil sorcerer, Jarvan, who was looking to seek revenge at He-Man. Jarvan, disguised as a kind old lady, befriends Ileena and provides her with a  magic potion that will make her feel stronger and more confident. The magic brew works wonderful when you first take it but after it wears off it makes you feel weaker and craving even more. Unaware of the side effects, Ileena takes the illusive potion and finds herself doing things she never had the courage to do before. While under its effect, she almost crashes her father’s flying car. Soon the young girl becomes addicted to the magic mixture. When she tries to get more from Jarvan he tells her she has to do something for him before he can provide her more. She must steal the transmutator that her father has invented. The transmutator is a machine which turns anything into whatever you desire; in the wrong hands it can cause great evil. This is something Ileena would have never done but she finds the addiction to the potion stronger than her will and decides to do as Jarvan asked. Once she gets the transmutator and hands it to Jarvan, he finally reveals himself and Ileena realizes she has made a grave mistake. After clearing her head, Ileena confesses to her father and friends what she has done and has He-Man come and save the day.

At the end of the episode He-Man speaks about the moral of the clip and how the potion compares to drug use. He explains about how drugs are bad for you and your health no matter what other people say about them. Gary Cross’s theory about how children are not being taught to be better adults like “the dolls and play sets that encouraged girls to act out their mothers’ role” (pg 290) did, is not applicable in this episode. Even though the episode did not prepare or teaches children about their adult roles, it does capture a significant problem in life, drug abuse. Drugs have been around since the 19th century and continue to be embraced by more people since the 1960’s when marijuana, amphetamines, and psychedelics entered the market. The epidemic for drug abuse and addiction is a continuing problem our government struggles to keep under control. Children must be made aware of the seriousness of this issue so they do not fall victim like Ileena did.

Tags: entertainment, PLC's, Television
From: Reading Journal
No comments yet