Caring Out of Control

In “Spinning Out of Control,” Gary Cross argues that  children’s television  began to focus on fantasies rather than prepare children for the adult world with the emergence of the “program-length commercial” during the 1980s (290). In order to analyze Cross’s argument, one must be familiar with these “program-length commercials.” Therefore, we will first study an episode of “Care Bears,” a popular 1980s PLC, so we can apply Cross’s argument to the television show.

In the episode “The Long Lost Care Bears,” the Care Bears come across a photo album of the Care Bear family. While looking through the pictures, they come across a photo of two Care Bears that they do not recognize. However, before they are not able to really study the picture in detail because the Caring Meter drops and they must go help who is in trouble. As they are on their way to the victims, the Cloud Mobile becomes caught in a snow storm and crashes. After enduring an avalanche, the Care Bears wake up in a valley. They then meet Perfect and Polite, the two bears that were in the photo in the photo album. These bears saved them from the blizzard and brought them back to their village. After exploring what seems to be a perfect village, the Care Bears realize Perfect and Polite were who the meter was sending them to help. Polite and Perfect were sad because they felt they had no friends or family in the valley. So, the Care Bears invite them back to Care-a-lot to become Care Bears and become a part of a big family of friends. After arriving back in Care-a-lot, Perfect and Polite cannot handle the Care Bear training as they fail at every task. They decide that  perhaps being a Care Bear is not meant for them and decide they will go back to the village. As they are discussing returning to the village, the Caring Meter once again drops and leads them back to the valley. When they return, however, the valley has been hit by a blizzard and is not longer a paradise. A village family is caught in the middle of the blizzard in their cabin and will not leave in fear of freezing to death. Though Perfect and Polite were scared to talk to them before, they decide to try to in order to save them. However, when they will not leave because they are scared of freezing to death, the bears decide to try a “Care Bear Stare” to melt the snow. While doing the stare, Polite and Perfect are unable to stabilize the power of the stare and lose control, causing them to fall to the ground. After they fall and tears fall onto the symbols on their stomachs, glowing spirits raise from their “tummy symbols” to the sky, and suddenly all the snow begins to melt and the valley returns to its normal climate. The villagers thank the bears for saving their lives. Polite and Perfect then decide to stay in the valley rather than return to Care-a-lot because they realize they do have friends in the  valley with the villagers.

Cross’s argument is somewhat supported in this “program-length commercial” based on several factors. First, unless there really is a Care-a-lot in the sky with Care Bears that we do not know about, then the show is set in a fantasy land with fantasy characters, which is what Cross argues is one of the major problems with the PLCs because they are not preparing children for the real world. However, despite the fact that the show is unrealistic, it does contain morals within the story line. For example, in the episode “The Long Lost Care Bears,” Perfect and Polite realize they really do have friends when they make an effort and talk to others more often. This can teach children that, even when they feel lonely and as if they have no friends, they can make friends with the people around them if they have the right attitude and are a little out going. Therefore, Cross is correct in his argument that the PLCs are set in fantasies rather than real life scenarios, but fails to recognize the fact that the “program-length commercials” have underlining themes that contain morals and are set in a fantasy in order to make the visuals and story line more appealing to the child viewer (296). 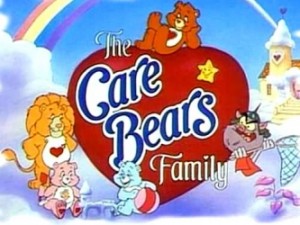 Tags: Childhood, PLC's, Television
From: Reading Journal
No comments yet