According to the article “Go Directly, Digitally to Jail? Classic Toys Learn New Clicks” (Stephanie Clifford, the New York Times, Feb. 25, 2012), retailers in the toy industry are beginning to modernize classic toys by integrating technology into them. Despite the fact that Barbie, Monopoly, and Hot Wheels have sold millions throughout past generations, retailers feel the need to modernize these classic toys. Monopoly can be played on a digital tablet that can count the money, taking away the pain of all the simple math. An iPad screen can now be used to watch Hot Wheels blaze across the track, as if imagination wasn’t enough. And Barbie? Oh, she just has as a camera embedded in her stomach, which allows children to take pictures and even transport the storage files (with the help of parents.)  The cause of these technological advancements is said to be a result of a disappointing 2011 for retailers, including Hasbro and Mattel, as children are wanting more tech-savvy toys, such as the LeapPad LeapFrog Explorer. John Alteio, director of toys and games for Amazon, says the reason kids want modernized toys is because they want to play with toys similar to the gadgets they see their parents using. While many toy retailers are beginning to modernize their toys, some critics think that the trend will soon fade away due to the high price of the toys compared to the toys that are cheaper because of the technology they do not possess.

This ties into our reading of Bradbury’s “The Veldt” focusing on technology taking over children. This is because children are beginning to lose their imagination as technology becomes more and more prominent in their lives. They are upset if they cannot have their tech-savvy toys, such as when the parents take away the technology from the kids in the short story. In order to steer our young generation in the right direction, retailers need to decrease the amount of technology in toys or, like in the story, a bad ending may be inevitable. 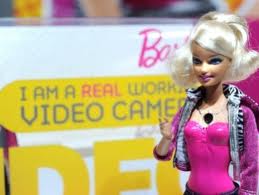 Tags: children, Play, technology toys, toys
From: In the News
No comments yet