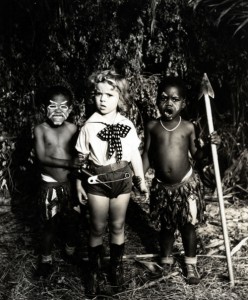 Shirley Temple being taken by Cannibals in "Kid in Africa"

A part of the “Baby Burlesk” series, the ten minute short, “Kid in Africa,” released in 1933, parodies the “Tarzan the Ape Man” movies by telling the story of a young girl, played by Madame Cradlebait, who is determined to civilize cannibals in Africa. Starring Shirley Temple as a missionary, Madame Cradlebait, the short opens with the arrival of the young blonde followed by several young black children who play the role of her servants and carry her luggage (which reads, “Civilize the Cannibals or Bust!”). Shortly after finding a place to nap, Cradlebait and her servants are attacked by a group of cannibals, portrayed by more young black children wearing face paint, who eventually capture the missionary and put her into a giant pot to prepare her for supper. Luckily, the heroic Diaperzan hears Cradlebait’s cries for help and summons his elephant to ride to her rescue. Diaperzan scares off the cannibals and saves the missionary. Soon after, the jungle has been civilized and a town has blossomed, complete with a traffic controller and a filling station. Wearing dressy clothes, Diaperzan says he will play golf this afternoon, but Madame Cradlebait reminds him he must wash the dishes. The short ends with Cradlebait having civilized Diaperzan as well, as he wears a frilly, pink apron while being subservient to her.

Opposed to other “Baby Burlesk” shorts, Shirley Temple’s role in “Kid in Africa” is a lot less flirtatious, as John Kasson describes the parts she frequently plays. The only thing that stuck out in my mind as coming close to crossing that boundary was the costume that Temple wears, her khaki “diaper” is very short and shows a lot of leg. Other than that, “Kid in Africa” is very tame in regards to flirtatiousness.

I did, however, find evidence to support Kasson’s claim that the humor of these shorts relies on adult knowledge playing against childhood innocence. A young cannibal calls another to come eat the missionary, to which the line, “if there’s anything I love, it’s true missionary,” is said. I believe that this line is a reference to the sexual position by the same name, and would be a joke that only an adult audience would be able to understand. The humor lies at the child not knowing what he is saying.