Should Video Games Take A Break?

Recently an article was written about how some of the most popular video games that we know today need to “take a vacation”. Ben Silverman wrote in Yahoo! Games that game publishers year after year produce new versions of their games  to milk out every dollar from their consumers that they can. Games such as Sonic the Hedgehog and The Sims are two of the five franchises that are recommended to take a break and cool it for a while. Each game is praised for its popularity and lovability, but criticized on the fact that all the repetition is dull and overkill. As I read this, I started comparing children today and children that lived less than a hundred years ago. In the article “I’m Bored: The Two Faces of Entertainment”, Stearns (1-29), the author argues that children, over time, started becoming bored more easily and parents increasingly felt the need to entertain their children. It’s pretty crazy to think that pre World War II, children were left to roam their neighborhoods freely and had to rely on themselves to find entertainment. Kids had to use their imaginations to create characters and games. Now, youth in America is shown, from an extremely young age, the possibilities they have with technology. One stereotype of little boys in today’s society is the one who is glued to his video games and doesn’t ever see the light of day, contrasting with how little kids should be out and active all day. Now, not only do kids have access to video games, but there are literally thousands and thousands of options, all with just the slightest changes. This article is supposed to simply criticize certain video games for their overkill, but when you look at it in the context of comparing it to our youth today and the youth we’ve been studying in class, it makes you think about how extreme and sometimes ridiculous entertainment is today. 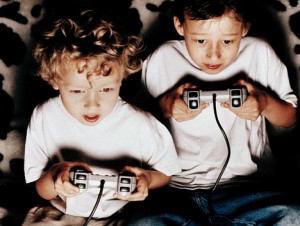 Tags: children, entertainment, video games
From: In the News
No comments yet