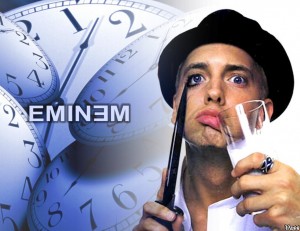 When the white rapper Eminem, formerly known as Marshall Bruce Mathers III, came on to the hip-hop scene in 1998, he quickly became every parents’ worst nightmare; he was overtly homophobic, excessively violent, and blatantly misogynistic, but most importantly, in a hip-hop culture largely dominated by African Americans, he was a face that middle-class, white children could relate to.

For a mere fifteen dollars, which could easily be saved up from allowance and lunch money, any kid (myself among them) could purchase one of Eminem’s albums on their own, despite the Parental Advisory sticker on the cover of the album, which was supposed to prohibit children under seventeen from buying the album but which was loosely enforced.

Much like the moral panic of the 1940’s and 50’s surrounding comic books, the controversy surrounding Eminem and his impact on children became a national talking point, with much of the public split between whether he should be considered a poetic genius or whether he was simply corrupting the minds of the youth. Just as comic books were thought to have been “the direct contributing cause of many incidents of juvenile delinquency and to the imbedding of immoral and unhealthy ideas” (144), so too were Eminem’s vulgar lyrics, though perhaps with a bit more merit.

Following the release of Eminem’s second album, The Marshall Mathers LP in 2002, the Eminem controversy boiled over even further as Eminem began to receive criticism from an audience he had not expected: kids. Students at Sheffield University decided to ban their own radio station from playing any of Eminem’s songs because, according to Dan Morfitt, the head of music at the station, “three people out of a student community of 20,000 complained.” This event, similar to the comic book burnings cited by David Hajdu, begs the question of whether kids themselves were actually offended, or whether the decision to ban Eminem was actually just “the puppetmastery of reactionary adults exploiting children too sheepish to defend their own enthusiasms” (119).

The controversy surrounding Eminem hardly hurt his sales, however, as he went on to be the best selling artist of the decade, proving, just as comics had during their golden era, that the more parents hate something, the more kids can’t get enough of it.