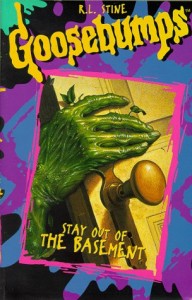 A "Goosebumps" series favorite among readers.

The Goosebumps book series is a mammoth collection of children’s horror novels published by youth literature giant Scholastic and written by author R. L. Stine (real name Jovial Bob Stine) between 1992 and 1997. The series rocketed to popularity and inspired a few spin-off book series as well as a TV show that had me glued to the set in the same vein of programs like Are You Afraid of the Dark and So Weird. While the series is supposedly intended for middle school readers (or older readers in terms of some of the spin-offs), I seem to recall there being a certain pride and competition in comparing the number of Goosebumps books in your repertoire early in elementary school while cautiously avoiding the eyes of disapproving teachers.

The Goosebumps stories are incredibly formulaic tales tucking age-old themes of the uncanny into pulpy and often humorous ~150-page packages. It was a formula that worked and allowed a decidedly human sense of morbid curiosity evidenced throughout history to work its magic in place of the moralizing heavy-handedness offered by turn of the century and previous children’s books. The draw of horror, as evidenced by the moral panic over comics featuring violence, crime, and the supernatural in the 1950s as discussed in The Ten Cent Plague by David Hadju, entices all ages in many different as well as overlapping incarnations.

Goosebumps, which features children exclusively as its protagonists, was surrounded by a similar, though lesser controversy in its time for its overtly macabre elements and decidedly “fun” rather than overtly literary prose style that many parents and authorities considered trashy. In my own experience, there were a handful of nights I had to leave the light on in my bedroom after reading a Goosebumps book, but nothing about the stories scarred me for life, affected my character negatively, or deterred me from reading what might be considered more educationally substantial books. Undoubtedly, there is  an element of the forbidden fruit that appeals to children and makes what adults may disapprove of as too graphic or raunchy for consumption by impressionable young minds a la the theory of the tabula rasa therefore more compelling, reflected appropriately in the famous Goosebumps tagline: “READER BEWARE…YOU’RE IN FOR A SCARE”.

The overwhelming success of Goosebumps seems to prove the inanity of the derisive “kids these days” attitude that finds a niche in every era when we look back in comparison on the comically tame but then-maligned children’s horror fare of the mid-19th century and its penny dreadful predecessors which found their way into the hands of young people. It is interesting to consider the inversion of this: “adults these days”, most obviously manifest in the rebelliousness of the teenage years but apparently more closely related to human history and nature with less owing to adolescent hormones than perhaps has been popularly thought. It is strange, as well, to think that the idea that children are people too with opinions and tastes that matter is relatively new.