The Modern View on Christmas Spending

Over the course of the twentieth century, Christmas has taken on a new purpose due to evolving consumerism and industrialism in America. Parents have taken to a sort of vicarious consumption in order to both earn the love of their children, and to try and outdo their neighbors. In an effort to appear more affluent than others, parents are increasingly spending more and more on pricey Christmas presents for their children. In Cross’s article, “Modern Children, Modern Toy,” he discusses the effects of this changing mentality regarding the gift-giving side of the holidays. He says that, “When parents bestowed presents on their offspring, they also attempted to share their excitement with the wider world of new things” (Cross, 59). This is another side effect of this new found vicarious consumption. By overspending on gifts for their children around the holidays, parents are trying to live out their desire for excitement and fun through their children. The giving of gifts turns to a new way for the parent to connect with the child without appearing to overindulge or spoil them. 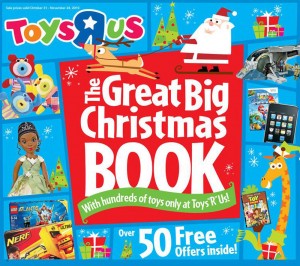 Ads like this, from large retailers such as Toys R Us, are aimed at parents as well as children and try to convince parents to purchase expensive gifts around the holidays through mechanisms like door-buster sales and free offers. By doing so, they can both appease their children, and not appear to be overindulgent to their friends and neighbors.  This mentality developed throughout the twentieth century do to new innovations in toy manufacture, and new increased parental concern over their children’s boredom. These sorts of concerns have created an atmosphere garnered towards over-consumption, and in which parents feel obligated to shower their children with gifts in order to appear better parents.

Tags: christmas, consumption, parents
From: Reading Journal
No comments yet