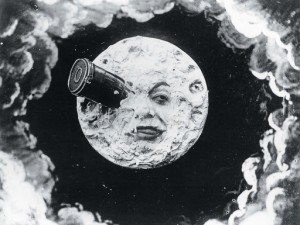 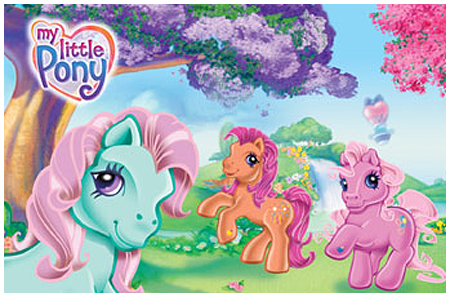 If I was a child of the 1980s, program-length commercials of My Little Pony would have given me reason to wake up early on Saturday mornings, assuming that is when the show aired. For this assignment, I watched an episode of My Little Pony, titled “Bright Lights”, which first televised on October 13, 1986. In this episode, the three baby ponies are kidnapped by two circus performers who force the ponies to sing and dance. While doing so, the shadows of the three ponies are stolen from them by the circus performers, and as a result the ponies are drained of their energy and talent. It is explained that the ponies’ shadows, and all other shadows, are the source of power needed to fuel Erebus, the villain of this episode.  The rest of the episode focuses on the search party led by the other ponies and two children, Megan and Molly, and their quest to rescue the baby ponies. After many chase scenes, the baby ponies are finally rescued, their shadows and all other previous stolen shadows are returned to their rightful owners, and Erebus is defeated.

My Little Pony, along with most other 1980s toy-based programs, focused all of its attention on kids, and kids alone. Gary Cross mentions this 1980’s toymaker trend of catering  just to children in his work “Spinning Out of Control”,  he writes: “One toy executive in 1983 claimed that 90 percent of toy consumption was driven by children’s wants; toymakers convinced themselves that they served children’s desires, not those of adults” (290).  My Little Pony justifies this claim, for it is a show about flying pastel-colored ponies who sing and dance, what more could a child ask for?  Cross makes further arguments surrounding the idea that children’s television and play of the ’80s differed from that of the previous decades. Not only was play of the ’80s seemingly  focused solely on children’s desires, but even more bothersome to parents was this new generation of TV programs that completely disregarded reality and emphasized fantasy. Cross states: “The old view that children should learn from the past and prepare for the future is inevitably subverted in a consumer culture where memory and hope get lost in a blur of perpetual change” (290). Traditionally, the purpose for play was to prepare children for adulthood and their predestined roles; boy’s play was more physical, and girl’s play more nurturing. The 1980s broke these traditions and replaced them with a more imaginative form of play, which was free from adult intervention. In the episode I watched of My Little Pony, there were no human adults present; rather, the character that seemed to be in charge most of the time, Megan, looked no older than ten years old. This concept of an adult-free fantasy world was all too appealing to kids, and at the same time bothersome to the parents.

Talking ponies, villains who devour shadows, and zebra sidekicks–it is safe to say that My Little Pony contained very little reference to the “real world”, but this does not mean the show was of no value to children. While this PLC may not have prepared kids for their future adulthood roles, it did allow for creativity and imagination to flourish. My Little Pony also incorporated valuable lessons on friendships, teamwork, and forgiveness. Based on our so far study of toys and the reactions they have received from adults over the years, I think it is fair to say that parents are hard to please. If toys are too realistic, parents seem to complain that they provoke violence, but if toys are not realistic enough then parents see no benefit to them. Toys are for kids, thus I think the strategy of the 1980s, which focused on the children’s wishes rather than the adults, should be praised.

The Brutality of Virtual Reality

In an article from the New York Times titled, “Go Directly, Digitally to Jail? Classic Toys Learn New Clicks” the topic of how children’s toys are becoming more integrated with technology is discussed. Specifically, children no longer are simply just playing with their physical toys but are now interacting toys with mobile devices.  For Monopoly there are now iPhone apps available that count everyones money (I guess it stops people from stealing from the bank!). In Barbie, there is a lens in her back and the captured camera image appears on the front of Barbie’s T-shirt. The topic that most caught my attention though, was an app for Apple products that shows “live video of the environment overlaid with graphics”. An example of this would be a child pretending to shoot his TV and the TV blows up on the Apple product display screen. Could this new app possibly be a step towards virtual reality becoming the preferred reality for the younger generation as in Ray Bradbury’s “The Veldt”? In “The Veldt”, there is a nursery room in which “Whatever you thought would appear” (pg. 164). I interpreted this to be symbolic for the increasing stake children have in the consumer landscape (preteen children bought $30 billion worth of goods in 2002. pg. 176) and companies producing products rapidly to satisfy there wants. If children start to prefer virtual reality, then virtual reality will be produced. The parents in “The Veldt” become scared when the virtual environment has become “a little to real” (pg. 162), and I sense that actual parents will too, become scared. I would not blame them either because as human-beings we have a socially internal need to be, not only with each other but, with nature. Bradbury refers to this bond as “living” (pg. 169). I cannot further articulate what the social bond with other living things is so I will borrow an excerpt from Ralph Waldo Emerson’s “Nature”, “In the woods, we return to reason and faith. There I feel that nothing can befall me in life, — no disgrace, no calamity (leaving me my eyes), which nature cannot repair. Standing on the bare ground, — my head bathed by the blithe air and uplifted into infinite space, — all mean egotism vanishes. I become a transparent eyeball; I am nothing; I see all; the currents of the Universal Being circulate through me; I am part and parcel of God. The name of the nearest friend sounds then foreign and accidental: to be brothers, to be acquaintences, master or servant, is then a trifle and a disturbance. I am the lover of uncontained and immortal beauty. In the wilderness, I find something more dear and connate than in streets or villages. In the tranquil landscape, and especially in the distant line of the horizon, man beholds somewhat as beautiful as his own nature.”

However, hypothetically, if virtual reality does advance so much that it is impossible to decipher it from actual reality, who decides this is a bad thing? Who decides that the feeling of reality is not as good as reality itself?

Video of “Bad Robot Interactive App” that lets you stream “live video of the environment overlaid with graphics”. From http://www.youtube.com/watch?v=sjra0Fw_Anw