The Best Gift I Never Received

In Gary Cross’s article entitled “Modern Childhood, Modern Toys,” he discusses the evolution of the holiday season and gift giving, and says, “The new Santa clearly represented abundance.” (Cross, 60) While I never had Santa, reading this I quickly had a nostalgic moment of being ten years old and having received so much already that I needed a gift to top them all.

My birthday and Hanukah always fell within weeks of each other so like Christian kids who had birthdays on Christmas Eve or the day after, I always felt as though I was getting screwed over only getting one set of presents.  So by my tenth birthday and tenth Hanukah I’d had enough of it, and decided that if I was only going to get one big present it was going to be the greatest present of all time… I fully intended to rid myself of my bed and replace it with an indoor bounce house. For $200 I could have as my BED what kids longed to have once a year at their birthday parties! What could possibly be better! That’s when I saw it, there, staring at me in the Sunday advertisements from Toys’R’Us was the Blast Zone Magic Castle Bounce House, seven feet by seven feet wide and five feet tall.  It was perfect. 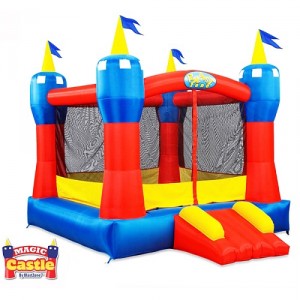 My parents had enough sense not to purchase this for me regardless of how many temper tantrums I threw. Twelve years later and without serious back problems I am relieved they didn’t.

In Gary Cross’ “Modern Children, Modern Toys” chapter, he shares his thesis that Christmas giving provides an opportunity for modern parents to show off their wealth and spoil their children without coming off self-indulgent over-spenders. (59) In today’s modern society, Cross’ thesis still holds true, as many modern parents continue to feel obligated to spoil their children through Christmas gifts, often because they feel driven to keep up with the gift giving of their friends, families, or co-workers.  The media leads modern parents to believe that their role in the Christmas festivities is to indulge their children’s desires and parents who do not fear being seen as lesser parents than their peers.  The expectations of gift giving in American culture are hard to combat, as many bloggers have shown the excess to which modern parents are spoiling their children because of culture pressures.   One blogger claims that the average American parent spends up to seven hundred fifty dollars each year on Christmas gifts.  Perhaps the most driving point is the fact that some gaming consoles have sold for as high as 30,000 dollars on EBay in the pre-holiday rush.  With parents spending in excess for consoles that might normally be in the 300-dollar range, it becomes clear that some modern parents feel the need to constantly strive for the best gifts to keep their kids in touch with the most up-to-date popular culture.  Cross even claims that “Christmas had long given permission to extravagance” (59), emphasizing the point that parents feel the need to bombard their children with extravagant gift giving each December. With the added pressure given by the media in commercials and television, parents are constantly coerced into upping the Christmas giving each year. The Kmart commercial from 2010, in particular, emphasizes a large amount of gifts and even places the family in a setting in which they’re surrounded by other parents to impress. Kmart tries to make the excessive gift giving affordable in their advertisement, in order to give all parents a chance to impress their friends through gift giving. Trying to represent the ideal situation, parents then continue to purchase excesses of Christmas gifts and are able to show off their love for their child to all their friends through the seemingly excessive spending. Through examinations in blogs and commercial ads, it becomes clear that Cross’ thesis about the desire to spoil children during the holidays as a means of emphasizing economic stances is still present in modern-day gift giving.