The Reality of the Pokemon Master Status

From the age of six to eleven, huge portions of my thoughts and energies were devoted to becoming a Pokemon master.  What is a Pokemon master, you ask?  Its a child who despises any thought of outdoor activity and socialization through physical play.  Its a child who is addicted to air conditioning, electronic media, and fast food.  Its a child who pouts and cries whenever anything interferes with the routine of going to McDonalds after school, watching Pokemon after that, and playing the Pokemon Gameboy game after that. Oh yeah, and its a child who has collected all 150 original Pokemon cards, including the hollographic editions. 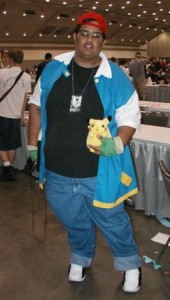 Pokemon Master-This is what dedicating your life to collecting toys makes out of you.

Pokemon’s success revolved around the phrase, “Gotta Catch ’em All!”  Replace the “Catch” with “Buy” and, in essence, the phrase pretty much means the same thing.  Pokemakers urged kids that the only way they were going to achieve that sacred status as Pokemon master, they were gonna have to consume, consume, and consume some more.    Japan created a product that hypnotized children into abandoning their dogs, baseballs, and, in extreme cases, their studies.  Kids began riding a vicious cycle that starts with ownership of one or several Pokemon cards, then a few packs, then, literally, a room with a mountain of trading cards.  Pretty similar to tobacco addiction, right?  But the reason a Pokemon master cannot finish a mile is only because of poor diet and lack of daily physical activity, not smoker’s lung.  This all goes back to parents and what they allow their kids to do.  There are consequences that go along with over-indulgence, and parents can either ignore them, or take the time to observe their children and notice that Pokemon masters are actually chubby, spoiled, brain-fried by-products of a consumerist culture.  With me, it started with the gameboy game, then a few cards, then, somehow, weekly trips to McDonalds.  Its weird how, when you’re talking about kids, unhealthy food and unhealthy media consumption always seem to go hand in hand.  Its as if once parents give up on regulating one aspect of their child’s indulgence, its easier to give up the next thing (if McDonalds isn’t the first thing, its usually the next thing).