In the last few years, there has been lots of news about graffiti artists showing in galleries and museums because currently there is a new visibility, respect, and cool factor to the art form. For example, a recent article from the Huffington Post tells all about a project in the Bronx of New York City in which “a block-long limestone mansion originally built as a welfare hotel for the retiring rich invites streetwise graffiti artists and others to gild its decayed rooms”. In 1915 a NY millionaire named Andrew Freedman died and left his money to build a mansion for the former wealthy to live in when they become poor so they could still have a wealthy lifestyle. The space is about twice the size of the white house, and since becoming a landmark in ’84 has been decaying and falling apart, which is ironic because the once lavish home of the disadvantaged wealthy has become the crumbling venue of street artists to display their work. 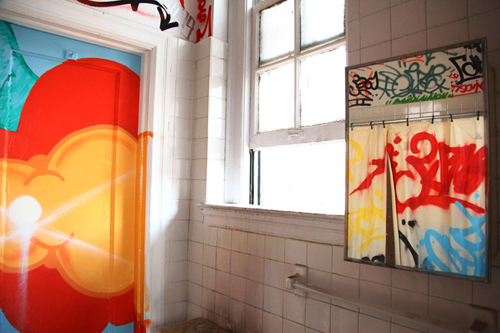 “At the same time in the late 70s and early 80s when this home’s original purpose was failing you had the rise of Bronx graffiti,” says Keith Schweitzer, the curator of the show. 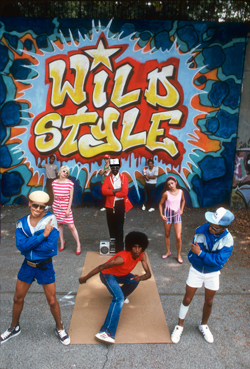 Part of the idea behind this show is to “revitalize the community” and the show is called This Side of Paradise. “With a few heavyweight street art and graffiti names bringing these rooms to life, it’s interesting to see their role as one of contributing in a positive way here where the emergence of a global ‘Wildstyle’ graffiti first blossomed while entire neighborhoods burned.”

The project makes a funny kind of reversal of classes and time: “the role of the artist rising from the ashes of the burned-out neighborhoods then and an art show in the decay of this home now”.

Although this article makes no mention of minorities or youth, it does talk about class lines and how graffiti art, an art of the lower classes, can transcend that line. I would like to reference another article from PBS News which reviews a new book about the history of American graffiti. This article says that contemporary American graffiti really had its start in the early 70’s when kids started tagging city walls. It has always been a movement grounded in youth culture, especially teenage. “Young people were the key players in shaping the contemporary graffiti movement” says Neelon, one of the authors of the book. He goes on to say that graffiti is “by definition a defiant and public exhibition” and “there’s an earned respect and craft to graffiti work done outside in the streets”. This can be a problem for moving this kind of work from the outside to a gallery because often it will not translate well into a different setting. However, Neelon says that “artists who master the craft of painting on the street can create perhaps even greater work in studio settings, where they have more time, resources and don’t have to worry about the weather or the police. What they might lose is the volume of people who see their work on a regular basis”. Because of the current popularity of street art, many museums and organizations are trying to develop niches for bringing the art into a new space. I think the abandoned house graffiti project is a really great idea of a way to bring graffiti art into the high art world because it remains authentic, does not get lost in translation, allows the artists to have time and resources, allows them to spread to other mediums, and is run by a museum so it attracts a high art crowd but is in an abandoned building so also attracts the public. 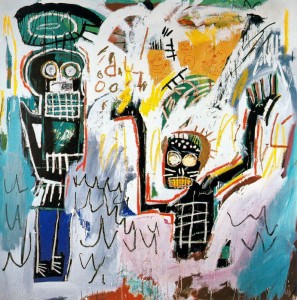 Robin Kelley mentions that young graffiti artists in the 70s were also sometimes able to sell their work to local merchants and community organizations, “and a handful enjoyed fleeting success in the Soho art scene” (418). He goes on to talk about graffiti organizations serving to expose young artists to galleries and dealers, but “those who tried to branch out beyond graffiti were often discouraged, and gallery and museum directors who invited them to show their work tended to treat them in an incredibly disrespectful manner” (418). I would argue with this in the present because galleries today are really trying to be respectful of street art, one example being the project in the first article which shows graffiti artists branching out to other mediums and exhibiting their work through an organization while keeping it in a public space. Kelley also says that “ ‘high art’ critics viewed graffiti as the embodiment of an aggressive masculine street culture” and I think that was perhaps half true in the 70’s with artists such as Basquiat (who was really only marginally graffiti artist) but is not true today… in my opinion current graffiti art (at least what has become popular to the public) has a softer quality than what Kelley refers to, it is more design-based than aggressive (419). Kelley goes on to say “the overnight success of these major artists, especially Basquiat, gave hope to some writers that the visual arts might ofer a lucrative alternative to low-wage labor and an opportunity to live off their own creativity” (419). He later says however that graffiti loses its appeal and value when removed from its site of origin and rarely generates much money for the creator, and loses its authenticity when it is not created illegally, and he says that basketball is different because it doesn’t lose authenticity when players go pro (420). I think graffiti artists today are trying to keep that authenticity by remaining anonymous, or doing paid work out in public areas rather than in galleries. When they do show in galleries, I think they can bring the voice of their experiences to a different group of people. Also I would say that currently there is more of a chance to get money and fame from street art than there is to become a pro basketball player.

Graffiti as an art form has an amazing ability to give a voice to the anonymous/unheard, and at the same time transcend the lines of race and class and has the power to send its creators from the poor neighborhoods of the inner city to the success of the museum/gallery/downtown scene. The Robin Kelley article was written in 1997, talks about the brief popularity of graffiti art in the 70’s, but with the new popularity and visibility of street art today, I believe it has more of a power to catapult artists to the world of success and fame.