In 1962, prior to Dr. Martin Luther King Jr.’s famous “I Have a Dream Speech” and in the midst of the civil rights movement, a unique children’s book was published. The name of the book was “The Snowy Day”, and it was written and illustrated by Ezra Jack Keats. The book deals with the adventures of a young boy named Peter, as he explores the winter wonderland around his neighborhood that results from the previous night’s snowfall. What separates this book from the multitude of other children’s books written about similar situations is that Peter, the story’s protagonist, is black. Perhaps even more distinguishing about this book is that while other stories attempt to highlight the child’s race or make it a central figure in the story, “The Snowy Day” does not. Peter is portrayed, quite simply, as a child. His race is irrelevant for the purposes of the story, because the plot focuses more on the beauty of the snow, the simplicity of his experiences, the carefree quality of his happiness- experiences that all children can relate to. Thus by doing so, “The Snowy Day” breaks down the barriers of race by producing a timeless story enjoyed by children of all shapes, sizes and colors, rather than targeting their story specifically towards black people (which would, by alienating other etnicities, almost constitute a form of racial segregation in itself).

Today marks fifty years since the award winning “The Snowy Day” was published, but it is worth noting that the world of children’s literature has not changed dramatically since then. According to a 1995 study by the CCBC (Cooperative Children’s Book Center)

In 1995, the CCBC found that out of 4,500 total books published, only 100 books written by African Americans, and 167 written about (without taking into account any probable overlap). (page 2 of article I used to write this post)

An even more troubling trend, according to Michelle Ann Abate in her book “Raising Your Kids Right”, is that:

Even when books are published for black, hispanic, asian or children of other ethnic backgrounds, the race of the child is highlighted. It is almost like a “for us, by us” stamp is attached to the literature, and the mere presence of this psychological stamp causes the very segregation that those seeking equality and integration vehemently oppose.

In chapter two (“Looking to Get Paid”) of Robin D.G. Kelly’s book “Yo’ Mama’s Disfunktional!”, there is mention of children seeking to use the avenue of professional sports (specifically basketball) towards success because they feel that their options are limited (page 415, course packet). I found this passage about Brian Collier, an award winning artist/illustrator, (page 2,”The Snowy Day” article on the Christian Science Monitor) particularly relevant to this situation:

“I don’t know what it was (‘The Snowy Day’,” Collier said, “but when I saw that boy Peter, he looked like me. I was like, Wow!” Growing up as the youngest of six during the often snowy winters of Maryland, Collier said he knew exactly how Peter felt watching the ”big boys” having their snow ball fights. The Snowy Day had subconsciously planted a seed inside of him, Collier said. For 10 years that seed waited, while Collier dreamed of playing professional basketball like the great Dr. J. But one day the 15-year old hoops fan stumbled into a freshman art class, and the seed was finally ignited. “It was an impact, it was visceral. You just feel it,” he said.”Just like the feeling of that first art class, Collier said America felt a bit of a spark with the publishing of the landmark picture book. “I think it put so much greatness into the world, a sense of diversity,” he said. “It unveiled something that was always there. The jolt was that the rest of the world, the publishing world, didn’t get it. They didn’t really get it until they saw it.”

This work inspired Collier to pursue a field many would have said someone of his race would find it hard to succeed in. The seed of hope implanted in him by the simplicity and beauty of “The Snowy Day”, however, resonated in his youthful mind, and eventually propelled him to success in the illustration and art communities.

In Elizabeth Chen’s book, “Purchasing Power: Black Kids and American Consumer Culture”, there is a section called “Ethnically Correct Dolls: Toying with the Race Industry” (page 358, course packet), in which she points out that (following the inspection and subsequent refuting of claims that Shani dolls’ butts were larger than Barbie dolls’)

These ethnically correct dolls demonstrate one of the abiding aspects of racism: that a stolid belief in racial difference can shape people’s perceptions so profoundly that they will find difference and make something of it, no matter how imperceptible or irrelevant its physical manifestation might be. (page 366, course packet)

It is my belief that this “stolid belief in racial difference” is exacerbated by the fact that the Shani dolls were produced specifically for black children. I believe that if those dolls had been released under the Barbie name and not under a demeaning, racially condescending subsidiary, those differences would not have been highlighted. In sharp contrast to the release of the Shani dolls was the manner in which “The Snowy Day” was presented. Rather than target the book towards black consumers, it was written as a non-racially binded children’s book. It was a book that all children could relate and identify to, regardless of the skin color of the protagonist. That to me is an extremely progressive idea, and an appropriate step in the right direction in regards to the dismantling of racist stigmas. Through the concept of understanding, of kinship readers felt towards Peter, they could learn that black children are not so different from themselves. Basic childhood experiences- laughter, wonder, excitement- are common ground that every child shares. And common ground is a huge step towards an ideology of equality in place of segregation.

Perhaps the greatest message “The Snowy Day” has left us with was summarized by the late Deborah Pope:

“As anyone who’s ever brought home a snowball could tell you, ultimately there is no color to put on children’s experience of snow.” 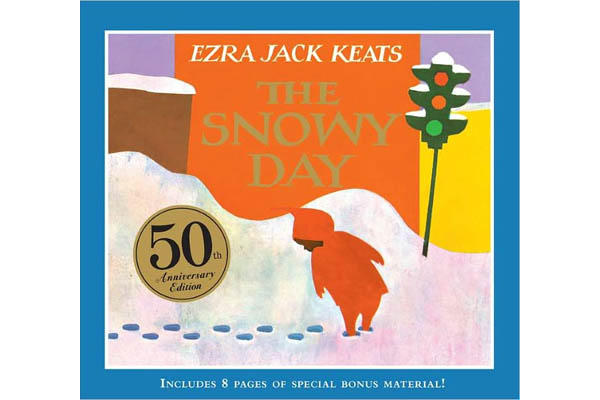 Cover of "The Snowy Day", courtesy of ChristianScienceMonitor.com