The popularity of the several Nintendo game systems that were released in the 1990s had profound effects on my creative mind.  I used to draw pictures of superheroes fighting villains and dinosaurs attacking cities whenever TV seemed unappealing.  These ideas I used for my doodles were mostly a result of the amount of Nintendo 64 I played at a young age.  Games like Star Fox, Rampage, and Super Smash Brothers, as their titles may suggest, are packed with colorful and unique characters and environments that would captivate any seven-year-old American boy.  My relationship with these games was so intimate that I began drawing pictures of my favorite characters at school and eventually in my room while doing homework.  Consistently practicing my artwork every day (out of sheer enjoyment, I might add) so that I could draw the characters just right, my skills developed to a point where I could draw Donkey Kong, Star Fox, and Mario better than the the older kids.

As a result of this newly developed talent, doodling became a hobby in which I indulged whenever I was not watching TV or playing video games.  I’m still pretty good at drawing Spider-man and Medieval Dragons, and I owe this to Nintendo.  Countless hours of flying through space and battling giant turtles inspired me to start drawing and opened my creative mind.  In my last two Archives of Childhood, I’ve asserted the importance parents taking the time to observe what electronic media their kids are indulging in and then determining how often they should indulge.  Now, I have proved how important it is for parents to think about the positive effects of at least some exposure to video games.  Some children may have creativity hidden within them, and video games may help bring them out.

I blame the occasional lower back pain I experience today on the years I spent bent over on my bedroom floor playing with the toys that dominated my childhood, Playmobils. The plastic dolls and furniture produced by the Playmobil line provided me with countless hours of entertainment. For years, the carpet of my bedroom remained unseen, and in its place was the Playmobil empire I had constructed.

The Playmobil Company was founded by the Brandstätter Group, headquartered in Zirndorf, Germany. The Playmobil was first introduced at the International Toy Fair in Nuremburg in 1974, and in 1975 Playmobil went global. The first Playmobil sets offered revolved around the themes of: knights, construction, and Indians. Once Playmobils hit the market, they were an instant success amongst children, and continue to maintain their popularity today.

Playmobil produces a variety of thoroughly detailed and realistic-looking toys, ranging from plastic dolls to plastic mansions furnished with plastic Playmobil furniture. The dolls, male or female/ adult or child, all have big smiles, no noses, and all sport different outfits, hairstyles, skin color, and more. Playmobil also provides children with lavish furniture to decorate your Playmobil home with. Playmobil products are typically sold in sets, so the price ranges based on the Playmobil item or set that you purchase. Typically, Playmobil dolls cost around $3.00 sans any additionally accessories, and sold sets can cost anywhere between $10.00-$100.00. The lucky children who somehow manage to persuade their parents into buying them a three-story house or castle pay as much as $160.00.

Playmobil creates hundreds of different play sets based around various themes, and one might conclude that some sets are designed with the intentions of being geared towards a certain gender. Howard P. Chudacoff mentions in his work, “The Commercialization and Co-optation of Children’s Play, 1950 to the Present”, that some theorize boys and girls to have different play habits and interests. Chudacoff states: “Boys were said to desire power and thus needed to be represented as playing with action toys that emphasized success…by contrast, consultants assumed that girls craved glamour and were more likely than boys to sit indoors where they quietly played with dolls and games” (180). Playmobil offers children a variety of sets based around differing themes. One such set is pirate themed, and comes equipped with a ship and dolls accessorized in pirate gear. Another set offered by Playmobil is a nursery set, which comes with a crib, rocking chair, baby doll, and more. Chudacoff mentions that boys are more prone to play with action toys, whereas girls prefer “glamour” and quieter activities. If these assumptions are correct, then in order for Playmobil to market to both genders they need to create action and adventure orientated toys as well as ones that “glamour” and nurturing themed, hence the pirate ship set and the nursery set.

Chudacoff also includes an argument made by Susan Linn pertaining to the idea that toys today no longer encourage creativity. Linn believes that: “Traditional construction toys such as Legos and Lincoln Logs no longer come boxed as collections of materials that would encourage a child to use them freely. Rather, she observes, they are packaged in “kits,” complete with explicit instructions…for putting the blocks together” (“The Commercialization and Co-optation of Children’s Play, 1950 to the Present”, 185). In contrast to Linn’s argument, I believe that Playmobils prompt children to use their imagination, whether it be freely choosing how to decorate a room with Playmobil furniture, or imaging that your bedroom floor is the ocean that your Playmobil pirate ship rides on. Playmobil simply provides children with realistic-looking toys, and the rest of the play is up to the child. As a kid, playing with my Playmobils meant entering an imaginative world, a world in which these plastic toys allowed me to construct a town, zoo, or any other setting that I could imagine. 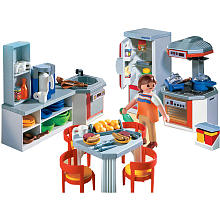 Playmobil kitchen and dining set sold at Toys R Us for $29.99.