I watched an episode of the 1985 Care Bears season. When the opening song came on, I immediately saw signs of Cross’ argument that the Program Length Commericals created a separate world for children not related to the realistic one that they would grow up in. During the opening song, one Care Bear sings “I don’t want to be a cook or a fireman, I don’t want to play trombone in the marching band, I just want to be a Care Bear like you!”. This shows that the children were being told not to have ideas of growing up to be something realistic, like a fireman, but instead being told to wish to “be a Care Bear”. During the episode however, the Care Bears visit a real boy who is upset that his parents are neglecting him and not throwing him a birthday party because his baby sister is being born. He’s resentful and angry at his parents. His friend tries to convince him to make a mess of his house to “get back at his parents, and although he’s a little hesitant, he still does do it some. The episode is all about the Care Bears trying to teach the boys a lesson of caring and understanding. The Care Bear’s attempt does reference the real world, as it tries to teach its viewers a moral of the story lesson. In the end, like all happily ever afters, the two boys learn to “care” because of their lesson, and they are happy about seeing the little baby sister. The birthday boy says he understands why his parents couldn’t throw him a party, and he still loves his new little sister. This episode does contradict Cross’ argument, as the Care Bears are trying to actually teach kids a lesson, as opposed to giving a thirty minute, unrealistic commercial of their toy. 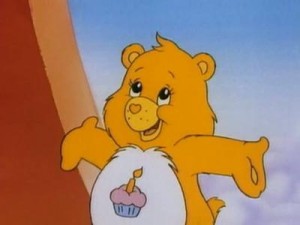 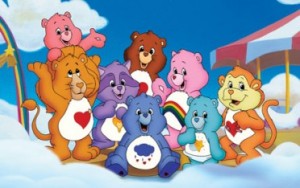 In the Care Bears episode “Care-a-Lot’s Birthday,” Noble-Heart and True-Heart give Brave-Heart and Tender-Heart the task of organizing the land of Care-a-Lot’s birthday party. As they start out the planning, Brave-Heart isn’t very cooperative with Tender-Heart and basically does all of the planning as he wants. Then, the baby bears, Tugs and Hugs try to help and mess up the party plans when they try to help and Brave-Heart yells at them for making a mess. As Tugs and Hugs walk off because they are upset, Mr. Beastly comes and kidnaps them to take to the evil No-Heart.  Eventually all of the bears in Care-a-Lot realize Tugs and Hugs have been kidnapped, so they all join together to go rescue them. In the end the Care Bears’ teamwork helps them rescue Hugs and Tugs and escape No-Heart. When all of the bears return to Care-a-Lot they realize that all of the birthday party must be planned in a short amount of time, but together they make it happen and it ends up being a great party.

After watching this episode, I do understand Cross’ argument that kids’ TV is separated from the real world. This is apparent with Care Bears because they live in clouds and have super powers. However, I disagree with Cross’ view that these PLCs don’t contain any value for children. In the episode of Care Bears that I watched, many themes popped up that I think are important lessons for children to learn. The whole episode seemed to be about working together. When Brave-Heart tried to plan the whole party his way and by himself he failed and ran into problems. When all of the Care Bears came together the party went well and they were able to rescue Hugs and Tugs. The lesson of cooperation is clearly shown in this episode even though it is shown through a fantasy world. I also think the whole Care Bears series does a good job of showing kids to care for one another and be nice. Overall, while Cross is right that shows like Care Bears are very separated from the real world, I think he is wrong that they do not have value to children. Moral values and lessons can be learned from these fantasy shows and be applied to real world situations.

Similar to other program-length commercials (PLCs), the Care Bears began as characters on greeting cards in 1981. The Care Bears were depicted by plush animals in 1983, and ultimately landed their own television show by 1985. Examining an episode of the Care Bears television series entitled “The Camp-Out,” it is immediately obvious from the initial theme song that this series is a feel-good series intending to reach out to the imaginative child.

The above summarized episode will act as an example of a typical Care Bears episode. Using this assumption, the Care Bears series abides by Cross’ idea of PLCs as “fantasy worlds.” However, the fantasy world created in the series does not perpetuate the fatalistic view that Cross would suggest. The Care Bears are living in a fantasy world, but the program attempts to teach lessons that are applicable to the real world of a child. For a child, learning the lesson of not calling out for help when you do not need it, and not playing tricks on your friends has a very real application. This lesson comes in a brief fifteen minute package that indulges the child in a fantasy world that is “free from adults” (290). It could be speculated that the child would actually respond better to an informal lesson from imaginary characters that it feels personally connected to, rather than in a formal lesson from an adult. The purposeful lessons in the Care Bears episodes serve as an antithesis for Cross’ idea that “the old view that children should learn from the past and prepare for the future” has disappeared into consumer culture (290). The Care Bears’ lessons serve to prepare children for the future. Fortunately for the child, preparation for the future does not come in a dry, dusty fashion, rather a colorful, indulgent fantasy world.

The video of “The Camp-Out” can be found at: http://www.youtube.com/watch?v=2FKx0sIF8cw&feature=sh_e_se&list=SL

(embedding for this video was disabled.)