The Walk to Harry’s

Growing up in downtown Brooklyn, one of the greatest rites of passage in the neighborhood was being able to walk to school on your own. Most kids accomplished the goal of convincing their parents that they were mature enough for “The Walk”—as my friends and I called it—by about the fourth or fifth grade. However, while most parents saw the Walk as a symbol of maturity and responsibility, my friends and I saw it as just the opposite. To the neighborhood kids, the symbol of maturity and responsibility that the Walk evoked was irrelevant; what we really cared about was the opportunity to explore previously uncharted territory, which for every kid I knew, was the local candy store, Harry’s. Harry’s was not just your ordinary run-of-the-mill candy store, but rather, it was the mecca of all candy stores, appealing directly to children (and purposefully excluding adults) by providing only the newest and nastiest kets around.

As soon as my friends and I earned the right to embark on the Walk on our own, we made it a point to stop at Harry’s every morning. We knew that our parents despised the place due to its reputation for shelving such a wide variety of kets and definitely would not approve of us spending our lunch money there, however, this only made Harry’s all the more appealing to our ten-year-old, thrill-seeking minds. Although the prices at Harry’s were hardly steep (it was a mere five dollars a pound), my friends and I always managed to leave with empty wallets and massive sacks of ketty-goodness.

Walking into Harry’s every morning with my friends was like walking into a theme park; everyone was utterly entranced, not knowing where to begin looking first. Immediately, my friends and I would grab a plastic bag and begin to rummage through the various jars of candy, deliberating on what looked best as we went. My friend James would call out to me from one end of the store, “Hey! Have you seen the new Twisted Tornado bubble gum?” to which I would reply, “No! But have you seen these Moth Balls? They look gross!” Conversations like this became commonplace in Harry’s, but the joy elicited from walking into this ket-heaven was never worn out. By the end of the trip, my friends and I would be lugging hefty ket-filled sacks that would often be substituted as lunch for the day.

At lunch time, my friends and I would find a large table in the school lunchroom and pour out our kets, much to the chagrin of our onlooking classmates who either did yet not have the freedom, or otherwise had forgotten that morning to make such purchases. We would sit at the table throughout our lunch period, swapping various sweets and trying to decode the flavors of ambiguously named kets; reveling in the attention we received for having such sought-after sweets.

This childhood experience of mine directly echoes the assertions made by Allison James in her scholarly article, Confections, Concoctions, and Conceptions. For example, James’s claim that, “sweets, for adults, are regarded as an adjunct to ‘real’ food and should not usurp the place of meals. For the child…the reverse is true: it is meals which disrupt the eating of sweets “ (James, 379) is a holistically accurate assumption, as my classmates and I viewed Harry’s sweets as the main meal of the day, with breakfast and dinner viewed merely as familial obligations, rather than valued meals. In addition, James’s argument that because “[kets] are despised by the adult world, they are prized by the child’s and become the metaphoric meals of childhood” (James, 383) is one to which I can attest, as I feel that the enjoyment my friends and I experienced from walking into Harry’s every morning stemmed almost as much from our sweet-tooth cravings as it did from our desire to experience the thrill of doing something that our parents clearly would not approve of. 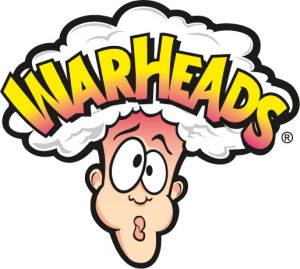 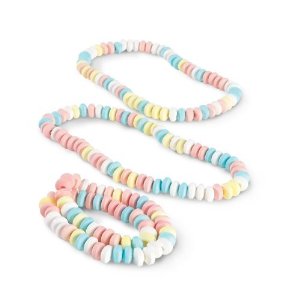 Candy Necklaces were invented in 1958, although the inventor and location are unknown. The price now is incredibly cheap, ranging from $0.39 to $17.99 for a 60-ct. I now understand why I always ended up with at least one in goodie bags for birthday parties or in my Halloween candy bucket (ahem-cheap parents).

Candy necklaces were a big part of my childhood, although now I wonder why. They’re sticky and not hygienic in the slightest. The idea of a necklace that you eat, and the parts that you leave for later that stick to your skin, is simply revolting. When I read the piece by Allison James on ket, these were all I could think about.

These brightly colored, stretchy necklaces are prime examples of ket for their cheapness and the fact that an adult wouldn’t eat them under any circumstances other than to appease her child (my mom once did this and I distinctly remember watching the expression on her face and wondering why she didn’t like the gift I was graciously sharing with her).

These edible jewelry treasures are obviously not meant for adults, which is part of the appeal of ket to kids, or so James says (397). I, personally, never really noticed or cared what my parents thought of the types of candy I was consuming, although my brother did. After Halloween, he always knew that if he wanted something, he could bribe my mother with some of his chocolate candy. Never once did he offer her the “lower class” candy of ket. He enjoyed his ket, just like the rest of us, and so when he wanted to trade one of the kinds he didn’t like, he would wait for friends or neighbors’ kids. This agrees with the argument James makes that ket is used as a socialization tool for kids (400). Although, it would be amusing to watch two adults try to trade a gumball for some jelly beans.

I suppose that what James says about ket rings true: adults prefer their chocolate or “sweets,” while ket is left to the world of kids. The two worlds are separate, and while I certainly thought I would never grow tired of the bright, fun candy, I guess I’ve risen to the dark side: chocolate. I think I’m okay with that.