The Agency of Arthur Agee 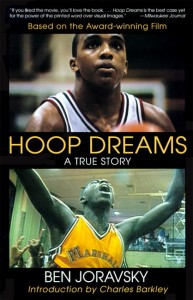 Steve James’ documentary Hoop Dreams was released in 1994 and tells the story of two African American boys, William and Arthur, and their struggle to reach their dreams of playing pro basketball.  Throughout the entire film, the audience watches William and Arthur encounter a number of decisions that prove to have a large impact on their lives, as well as the lives of their families.  Despite the issues each new decision brings, almost everyone has the same end result in mind:  a career in the NBA.

In the movie, Arthur Agee has to decide what university/college would be best for him to attend; the idea of what is “best for him” encompasses what is best for his family and what his parents most approve of.  When meeting with the scout from Mineral Area College, Arthur sits between his mother and father, and contemplates what the “best move” would be.  On the one shoulder, Arthur’s dad, “Bo,” assures his son that any college he picks would be the right choice.  He goes on to say that even if the family has to struggle financially, they would help him achieve his dream.  While Bo is communicating this to Arthur, we see his mother, Sheila, on the other side of him shaking her head.  She is not as fond of the idea of suffering financially in order to realize Arthur’s dream; she’d prefer that Arthur attend Mineral Area College because it would be paid for, and be the responsible thing to do.  The conflicting parental views most likely stem from Bo wanting to relive his lost basketball dreams through his teenage son, and Sheila’s motherly instinct to have her entire family’s best interests at heart.  In addition to these contradictions, across from Arthur sits the Mineral Area scout, a man whose salary depends on recruiting talent and who wants to seal the deal as quickly and smoothly as possible.  The whole scene depicts a situation in which all the pressure rests on the shoulders of one teenage boy.  Ultimately, Arthur accepts the offer to Mineral Area College; whether it was of his own agency is undeterminable.  As a boy with a close relationship to his mother, the audience could assume that his choice was largely swayed by her opinion and Arthur’s wish to please her.

I think James chose to depict individual agency the way he did because he wanted to emphasize how complicated it was for these two African-American teens to accomplish what they so strongly desired.  It was apparent that William and Arthur’s decisions not only influenced their futures, but the futures of their families.  Although their personal circumstances were different, it seemed like all the choices each of the boys made were carefully considered and took multiple people into account, showing that the dreams of certain individuals are not so simply transformed into reality.  Some, unfortunately, are even impossible.