One of my most enjoyed childhood toys was Polly Pocket. She was not only exciting because the enormous amount of clothing my parents bought to compliment their purchase of the doll, but she was small enough to put in my pocket and take with me anywhere I went. Trust me, Polly was the accompaniment of choice for several doctor’s visits, school plays, and movie nights.

Created in 1983 by Chris Wiggs, Polly was  not introduced to stores until 1989 and finally picked up by the massive toy producing company Mattel in the year 1998.  She was very similar to other doll lines, such as Barbie and Bratz, but her conveniently small and all around plastic reality (clothes, hair, and body) gave her an edge her competitors did not have. Polly did  not come alone. She had several friends: Shani, Lea, Lila, Crissy, Kerstie, Rick, and Todd. This gives the consumer enough characters to create not only an elaborate scene for play, but a huge wardrobe to create for each doll owned. It was this thought that monetarily appealed to Mattel in late 1998 and led to the creation of Fashion Polly!

The initial purchase of a Polly Pocket doll, and a few complimentary fashion items, starts at about $10 with additional items ranging anywhere from $10-40.

This doll line definitely appeals to the recent increase in things colored pink in an attempt to reach a young, female consumer. It is also made small to appeal to younger children who feel a sense of control while playing with smaller items. The fact that Polly has so many friends and extra accessories to accompany her adventures makes for a great business item that keeps consumers needing to purchase more. There is also an incentive to update your wardrobe and doll as the child continues to play with the items by deliberately making the line out of plastic: a material that is sure to run down after lots of usage. 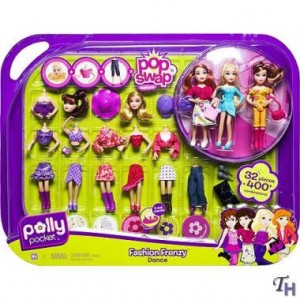