Barbie was a huge part of my childhood, like many other girls. The doll, launched in 1959 and beloved ever since, comes with many different variations of skin color, career, and clothing options. It is widely available in toy stores and even grocery stores. My journey with Barbie began quite simply. My mother got me a Barbie doll when I was 4 or 5. For Christmas and my next birthday, I asked for a few modest accessories so that I could enjoy a few different adventures with my Barbie. Next, I began seeing commercials featuring the rest of Barbie’s family: Ken, Skipper, and Kelly. Of course, I had to have them all. How could I let Barbie live her life alone?! Pretty soon, Barbie needed a van to get around with her new family, but Ken didn’t like the van, so he needed his own Jeep. When Barbie’s first movie came out, I needed a whole new set of Barbies to live out the Rapunzel story. My old dolls already had a life I couldn’t take them away from. My parents and other family members gladly obliged my Barbie fantasies for years, but the final straw came when I got the Barbie Hotel. It cost over $100, had an elevator, and working telephones. I had never considered Barbie needing a hotel until a slew of commercials came out telling me I needed it. After that, my mom said I would have to make do with what I already had. She was sick of me seeing new commercials every day and deciding I had to have the latest item. Although Barbie does not classify as a PLC (program length commercial), I think the popularity of the Barbie movies, and the heavy advertising (a Barbie commercial ran during every kid-related show I watched, and it was usually more than one) would lead to the same effects as a PLC. It did for me. The article we read was titled “Spinning out of Control”, and that’s exactly what happened during my childhood. I started with one doll, and ended with a van, jeep, VW Beetle, 2 houses, a boat, a hotel, over 20 different dolls, and enough clothes and accessories to fill a real closet. It was never enough. That’s the type of environment PLCs and heavily advertised toys create. 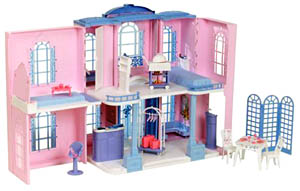 A picture of the Barbie Hotel, the final item of my Barbie Collection

Tags: consumerism, Dolls, PLC's, Television
From: Archive of Childhood
No comments yet