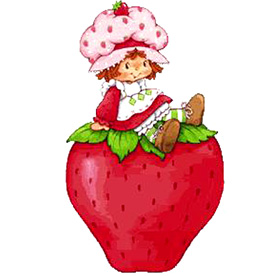 In Gary Cross’s article “Spinning Out of Control” he argues that “the old view that children should learn from the past and prepare for the future is inevitably subverted in a consumer culture where memory and hope get lost in the blur of perpetual change (290).” After reading this I watched an episode of Strawberry Shortcake because it is an example of a PLC (program length commercial) according to Cross (296). In this particular episode Strawberry Shortcake was a finalist in a baking competition where she had to travel to Big Apple city and participate in a bake off with the “villain” Purple Pie Man that will be on TV. In order to get to Big Apple City, Strawberry Shortcake has to travel on the back of a butterfly. Once she is there she makes tons of friends instantly, and they are all eager to help Strawberry Shortcake win. Throughout the whole episode Purple Pie Man is constantly trying to sabotage Strawberry Shortcake’s chances of winning, but always fails because Strawberry Shortcake’s new friends are there to help her out. Ironically at the end of the episode the announcer of the bake-off offers Strawberry Shortcake a television show, but she politely declines because she will miss her friends. The announcer then punishes Purple Pie Man by making him the new vice president of the television network. Strawberry Shortcake according to cross was the “girls’ version of Star Wars,” and I would completely have to agree  because it the whole show was not relatable to real life (299). The whole setting and plot was unrealistic and so was the process of making so many new friends. No where in this episode did I see any type of life lessons or preparing children to live in the real world. It was all about making new friends, so in my opinion Cross’s argument holds true for the episode I watched.

Tags: children, Fantasy, PLC's
From: Reading Journal
No comments yet