Gary Cross’ article, “Spinning out of Control,” states that “the old view that children should learn from the past and prepare for the future is inevitably subverted in a consumer culture where memory and hope get lost in the blur of perpetual change.” I would agree for the most part, that most children’s television shows are pointless and mindless entertainment. However some shows were able to capture young audiences as well as teach them valuable lessons.  G.I. Joe is a good example of a perfect balance between fantasy and (somewhat) reality.  The episode that I watched was entitled “Red Rocket’s Glare,” which was about Cobra Command trying to blow up the world (surprise, surprise ).  Cobra Command was able to buy out a lot of small locally owned businesses across the country and turn them into a series of fast food restaurants called, Red Rockets.  The Joe’s first discovered that something was a midst when they took a short leave of absence to visit one of their teammate’s Aunt’s newly owned Red Rocket restaurant.   There they discovered that a biker gang (with ray guns) was hired by Cobra Command to harass these restaurants so they could lose money and have to sell their business to evil conglomerate Extensive Enterprise, which (surprise, surprise ) is owned by Cobra.  The Joe’s are able to fend off the bikers but in turn trigger Cobra’s attack on the world by launching all of the rockets on top of the restaurants which turned out to be actual rockets and not just props (surprise, surprise ). But in the end, the Joe’s prevailed again through teamwork, intelligence, and some really good resources. 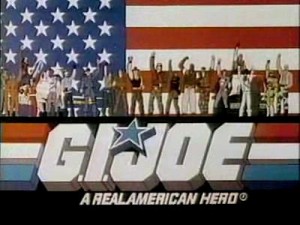 Tags: Childhood, Television, toys
From: Reading Journal
No comments yet