Prior to my early teens, I eagerly used my after-school hours to get my daily fix of an Japanese anime TV show known as Dragon Ball Z.  The show consisted of a team of flying muscular martial arts masters defending the earth from all-powerful, usually extraterrestrial threats.  At the beginning of each season, a  super powerful bad guy would show up and start wreaking havoc on fictional earthling cities.  The Z-Fighters, the team of muscular martial arts masters mentioned earlier, move in to kick some evil butt, only to find their new foe too powerful to overcome.  After suffering a number of casualties, the Z-Fighters retreat, train until they reach a new level of strength and speed, and take on the bad guy once more (said bad guy was killing countless innocents while these training sessions were in progress).  There is always a small amount of blood, a moderate amount of fists punching holes into stomachs, and an extreme amount of taunting, threatening, stare-downs, explosions that last for forty-five seconds, and emotional outbursts that serve as indicators that someone is about the get the snot beaten out of them.Of course, after much struggle and determination, the bad guy is annihilated without a trace and the Z-Fighters save the earth once more.

This is not only funny because this synopsis applies to every single season of Dragon Ball Z, but also because the makers of this mindless cartoon always managed make each season about one-hundred episodes in length (each episode being about twenty minutes long).  With such a simple story line, editors were forced to insert countless fillers, which are scenes, episodes, sometimes even characters added for the sole purpose of using up time (i.e. before a fight, two characters will stare at and taunt each other, only allowing enough episode time for only one or two rounds of high-octane brawling). 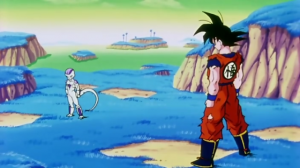 Protagonist Goku vs. Villain Frieza. They stare at each other before they fight, which kills about seven minutes in each episode.

These fillers occurred so often that the average viewer, an eight year old boy with an overactive imagination, did not realize that time he will never have again was being flushed down the toilet.  This show pertains to our class discussions about television and the effects of its availability to children nowadays.  But unlike the argument derived from our discussion asserting that television can act as a pacifier for the  children of busy parents, I will assert that specific television programs, like Dragon Ball Z, only appear to pacify children while in reality are stealing from them.  Time is the very essence of life, and when children spend about three-fourths of their pre-teens watching a show that wastes time on purpose, pacification should be the last concern of parents.  Some parents just choose any binky and shove it in their child’s mouth, mistaking silence for good parenting.  If a mother truly wants her child to live a rich and fulfilling young life, she must actively engage in everything their child indulges in.  I say this because my familiarity with time killers.  Shows like Dragon Ball Z might seem extremely stimulating if the only thing being observed is a child’s ecstatic reaction to them, but in reality, no lessons are learned, good unrealistically triumphs over evil, and time that could have been spent reading or running is wasted.