Toys, were the staple of childhood. Whether you played with Transformers, Hot Wheels, action figures, Barbie or GI-Joe’s, the toy required that you use your imagination to create a scenario or plot, with a particular goal in mind that you and your toy could achieve. I am purposely using past tense for this description because kids have become so absorbed with today’s technology that toys no longer require the extensive thinking and imagination that they one did.

The New York Times wrote an article on how toys have changed, and once MSNBC.com caught ahold of it, Stephanie Clifford wrote an update version of the article. “Classic toys are becoming much less classic because of upgrades meant to entertain technology-obsessed children.” Stephanie explains that the reason for children growing up with the desire to be more technological is because they see all the gadgets that their parents are playing with and operating. The main attraction that they are writing about is the new Barbie. The new Barbie has become a digital camera, her camera lens in behind her and the picture then appears on her t-shirt. The photo can then be uploaded to a phone or a computer. In my opinion this takes away the whole point of Barbie, all that she will be now is a camera, little girls won’t know how to make up a story and have their dolls act it out.

There are a lot of people, myself being one of them, that feel toys and technology should not mix and that children should still have to utilize their imagination. I feel that this new technological advance could cause something similar, just not as extreme, as the moral panic that our society experienced when children became obsessed with comic books. Perhaps this new technological craze that is taking over the toys could stand to resemble how comic books were seen taking over children’s innocense. 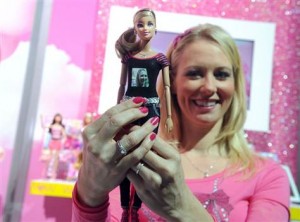 A picture showing how Barbie is now becoming a digital camera.

Tags: barbie, consumerism, girls, Modern toys, technology
From: In the News
No comments yet