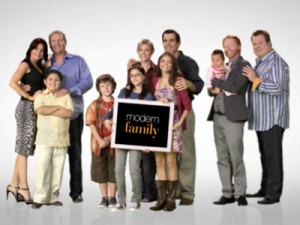 Huffington Post writer Ann Brenoff states that she is a big fan of “Modern Family” and that she loves the shows, “smart humor and characters”.  But in this article she rips the show and the Writers Guild of America, for letting a particular episode of “Modern Family” air.  The episode as she describes it is titled, “Virgin Territory” and deals with the sex life of the high school senior Haley who apparently has been sexually active for a while now with her boyfriend.  Then the father, Phil, says that he is the cool dad and should be more ok with his daughter being sexually active.  Brenoff takes offense to this statement and the rest of her article writes about how kids aren’t having sex as much as they used to be and that this show shouldn’t be showing lies to the youth of the country.  Brenoff then states that she knows that teens aren’t ready to be having sex by stating, “Seventeen-year-olds may be physically ready to have intercourse, but emotionally they are far from being able to handle it.”  Then she ends her article by stating that the writers of “Modern Family” should have had Haley hold out from sex with her boyfriend and that she has to wait until college.  Brenoff has a clear stance on what children/teens should see on T.V, and that is that T.V. is way to inappropriate for minds of our youth.

This article defienetly relates to fear in parenting that Chudacoff talks about in “The Commercialization and Co-optation of Children’s Play”.  Chudacoff commonly talked about the idea that T.V and videogames shaped the minds of young and inspired them in some way.  He states, “Oppurtunities for fantasy play mushroomed, but at the same time character and story lines shaped children’s amusements in a way that, at least in some fashion, overrode independent imagination” (pg. 185).  To me, this quote means that the imagination of a children’s mind is corrupted by some of what they see on T.V and that their imagination is based on some of the plots and characters they see.  So, a child instead of dreaming about powder-puff girls and cupcakes are now dreaming about the sex life of Haley on “Modern Family”.

Another relation to a reading from class, is the idea of who is the filter between the kid and what they see on T.V.  Spigel and her piece titled “Welcome to the Dreamhouse” argue that the parents, more specifically the mother, are the filter to their child’s T.V schedule.  Brenoff from the Huffington Post says something different in that, “The most-powerful lobbying group in America is the Writers guild of America.”  She then goes on and rips the writers of “Modern Family” and the guild for letting this air, but according to Spigel she has no business doing so and that is because this should be the mothers job not to let her child see it.  So overall, the ideas Brenoff talks about n her article and what we have been dealing with in class are very similar.  Why are parents scared of T.V?  Well according to Brenoff it is because of shows like this.  But with what we have discussed, there is still no way to tell how a teen or child would take in this information about sex, but somebody must relegate it, but we have to figure out How and who must relegate the television?

Tags: Childhood, Parenting, Television
From: In the News
No comments yet