The year was 2001, and I was 9 years old. My dad had come across a pair of tickets to a home game for Honduras’s national football team against Mexico, and asked me whether I wanted to come along with him. I’ve heard that every man at some point during his life takes, as a wife, one sport. While he may be unfaithful at times by engaging in other sports, it is to this sport to which he will be permanently bound for the remainder of his life. My father’s sport was baseball. That probably explains why, unlike every other child in Honduras, I lacked any sort of familiarity on football and did not partake in the religious fervor that its fans tend to engage. That all changed on a chilly October day in 2001. Out of pure curiosity for the event my school friends had been ranting about for the last month or so, I agreed to go with my dad (mostly because I wanted to know what made football more interesting than Hemingway’s The Old Man and the Sea, which despite my high praise had somehow failed to elicit anything more than a “whatever” from my friends). Once at the stadium, a wave of excitement drifted over me and I ran ahead of my dad so that I could see where the deafening noise was coming from. Then I saw it. The green pitch, the chanting fans, the waving flags. They say when you meet the love of your life time stops, and that’s true. I felt like I stood there for an entire lifetime before my dad snapped me out of it and walked me to our seats. There isn’t enough space in this post to describe how I felt during that game, but suffice to say Honduras won by three goals, and I had fallen in love for the first time in my life.

Following the game, and to advertise Honduras’s campaign towards reaching the 2002 World Cup in Korea/Japan, Coca-Cola (the national team’s main sponsor) released a kit that included a soccer ball and the two small goals. You could not buy the ball in stores- it could only be purchased by redeeming 12 proof of purchase stamps from qualifying products. To promote the kit, Coca-Cola aired commercials showing the national team’s players doing tricks with the ball and scoring into the goals. The day after the game my friends (not a single one surprised at my overnight transition from indifferent to obsessed about football) and I consumed more Coca-Cola than should be humanly possible and redeemed our purchases to the nearest distribution center. Every week one of us would get to keep our new found treasure at their house, with possession changing hands on Fridays. Every Friday we would set up the goals on somebody’s street, place the ball in the center of our “field”, and a metamorphosis would occur. The walls around us turned to fans. The asphalt beneath us turned to beautiful grass. We were no longer children, but instead became our idols. Afterwards we refreshed ourselves with (big surprise!) ice-cold Coca-Colas.

Thinking back, this is a perfect illustration of the phenomena described by Howard Chudacoff in Children at Play:

Advertisers quickly learned that they could merge a “backstory” of fantasy with a product to create a meaningful relationship between product and child. The licensing from movies, television programs, and sports gave toys a very explicit significance… most children understood the product in a way that most adults did not. (Course Packet page 180)

In Honduras the vast majority of children (especially boys) loved Honduras’s national team, regardless of whether or not they liked football. It was a way we all bonded, came together, existed as one. There were no boys and girls, no kids and adults, no rich and poor. For 90 minutes, we were all just Honduran. Coca-Cola used that indescribable (at least to children) feeling of belonging, of unison, to advertise their product. By merging the national team and Coca-Cola products, the line between them became blurred. We saw Coca-Cola as the moment when a player made an extraordinary dribble, or as the feeling when all the crowd roared and danced when Honduras would score a goal. Coca-Cola became pure, unfiltered happiness. I saw anyone that chose Pepsi over Coca-Cola as hating the very core of being Honduran, of conspiring to deprive us all of the joy of qualifying for the World Cup. Many of my friends shared those sentiments. The kit Coca-Cola provided took it all a step further. After watching their commercials, we all wanted to use the same ball that the players used, and to score goals into the same posts that they did. We wanted to dribble the same, and shoot the same. We came to believe that the “magic” the players had was a product of the Coca-Cola ball itself. The ball and goals became mystical figures, items that when in our possession made our skill-set limitless. We were capable of any trick, could score any goal, and would eventually make our way into the national team to play alongside our idols. My parents and many adults did not and could not understand why we felt so strongly about these kits. How could they, after all? They were too old to play on the national team, so we figured they would never understand. Those days we existed for one ideal- “Joga Bonito”, play beautifully… 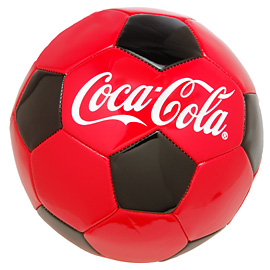 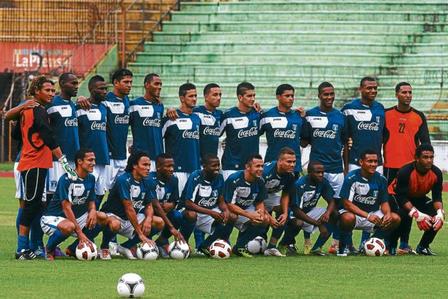 Honduras National Team sponsored by, you guessed it, Coca-Cola. Courtesy of ElHeraldo.hn