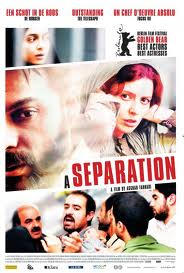 In the national news section of Houston’s official news website in an article entitled “Oscar Foreign Directors not Daunted by Kid Actors”, an award-winning director of Iranian films, Asghar Farhadi, talks on the troubles of working with his daughter in his current Oscar-nominated film, “A Separation.” Eleven year old Sarin Farhadi plays “an estranged Iranian couples child.” Sarin’s father Asghar says his daughter “was the most difficult person to work with on the film.” The article described Sarin to be “the biggest diva on the set.” While Farhadi humorously talked on the troubles of working with his daughter he also gave some insight when working with child actors. The article explained that he “doesn’t completely explain the plots of his movies to child actors “and believes the less they know the better they do. This, he explained, was probably why it was difficult working with his daughter. She was already too engrossed in the story of the film. In other words, she knew too much to be natural.

I chose this national news article particularly because of the director’s quotes on his experience working with child actors and the approach he takes when they are involved in his films. When reading this, I immediately thought of the Shirley Temple reading “Behind Shirley Temple’s Smile: Children, Emotional Labor, and the Great Depression.” There seems to be an overarching agreement between movie producers, directors, and those involved in film making in their belief that children are better on the big screen when they are “natural” and “innocent.” In the reading, Kasson includes a statement from Shirley Temple’s mother in which she states, “I want her (Shirley) to be natural, innocent, sweet. If she ceases to be that I shall have lost her-and motion pictures will have lost her too” (136). It seems likely that Asghar Farhadi would concur with this theory. With his daughter being an important child actor within his Oscar-nominated foreign film, his opinions, and that of Gertrude Temple seem closely connected. Just as the directors in Kasson’s article argue of the dangers of Shirley becoming “spoiled” and resulting in her innocence wiped from her smile, Farhadi seemed to be stuck in the same situation when his daughter became the “diva” on set.

Not only does this news article present a current view of a director’s approach and experience with child acting, but it creates a correlation between past and present ideals on children in film. It also bridges the borders between America and foreign countries when relating viewpoints of child acting.

Tags: entertainment, parents, Shirley Temple
From: In the News
No comments yet