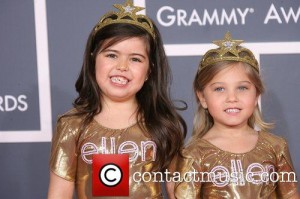 Sophia Grace and Rosie in the Grammy Awards 2012

The British duo started their public display with their YouTube video singing Nicki Minaj’s top chart song Super Bass. It was there Ellen’s team discovered the young sensation and invited them to Ellen’s show. After an appearance on Ellen’s show, Ellen was extremely impressed she sent them as her correspondents to the 2011 American Music Awards. Now, after obtaining more exposure through Ellen at the 2012 Grammy Awards the girls state they are becoming pros at red carpet events and interviewing.

These young girls are being exposed to the adult media culture at a very fast rate. Critics wonder how the events they attend and the content of lyrics they sing may influence the girls childhood. As Lynn Spigel wrote “Television’s immediate availability in the home threatened to abolish childhood by giving children equal access to the ideas and values circulated in the adult culture” (Pg 150). In the Ellen show the girls stated they learned the lyrics to Nicki Minaj’s Super Bass song in under a week , yet do not know what the song is really about. During the Super Bass performance Sophia Grace is caught singing “he cold, he dope, he might sell coke” and “He just gotta give me that look, when he give me that look then the panties comin’ off, off”. Conflict arises questioning if the girls performance displays the parents lack of character in raising their daughters or supports an impressive talent which Sophia Grace and Rosie as potential superstars in the making. Whatever the conclusion is, we can all agree the young duo has an amazing career in the entertainment industry and we will be seeing a lot of more of them.

Tags: children, entertainment, Parenting
From: In the News
No comments yet