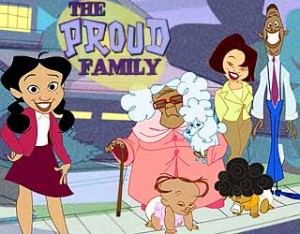 A favorite cartoon of mine at the age of 10 was The Proud Family on Disney Channel. It started airing in 2001, and depicted positive family life in  African American culture. As far as I knew, this was the only cartoon of this kind on television, although there were a few live action sitcoms on before and after The Proud Family aired.  The show was centered around a smart, respectable, 14 year old girl named Penny Proud. She lived in a house with both parents, and her grandmother. They lived in a nice neighborhood in which they were not the only minorities, and Penny’s cast of friends were very diverse.  This cartoon came as a model that African Americans did not have to live the way they were generalized.  At the time it was one of very few shows on Disney that featured a majority minority cast.  High profile black entertainers, such as Tommy Davidson and Kyla Pratt and  others found here, were able to become part of a television show that was a model for the black community. My family growing up was very much like the family depicted on The Proud Family.  To me, this show was a depiction of a life to which I could relate. It was a show, along with Family Matters, That’s So Raven, and Kenan and Kel, that black people had to be proud to allow their children to watch. It was relevant to issues that black families faced, and was a correct depiction of the unity and cohesion within the black family in a very positive sense.