Shirley Temple in the Baby Burlesk short video, Kid in Africa, is set out for an expedition to search for and civilize the Cannibals tribe members with her African tribe members. At the beginning of this clip Shirley directs and commands her tribe members to do as their told, which is fairly unusual within this time period due to the fact that there were not many women leaders. The Cannibals then invade her tribe members and explicitly add salt on each person to symbolize that they are about to be eaten. Shirley believes that she can help civilize them. Then, as Shirley is in a big pot being cooked the cannibals are sitting around her chanting, “We want food!” All the cannibals are African, in diapers and have their face painted. The cook of the Cannibals then calls a different tribe and says that they should come eat. The tribe says that they wouldn’t want to pass up this opportunity. As Shirley is in the pot she is reading a book called. ‘What to do in case of a Sunburn’ which represents a sense of comic relief. Throughout all the commotion there is a little boy that is dressed in leopard loin cloth that is supposed to depict Tarzan. He calls out for the longest time until his elephant comes to help him rescue Shirley. There is a huge satire relating to the movie Tarzan of the Apes (1918). In the movie Tarzan rescues a girl named Jane which is essentially Shirley in this Burlesk short video. As this Tarzan character is saving Shirley, Shirley, acting like an adult, powders her noses in realization that her hero has come to sweep her away. As Tarzan and his elephant scare all the cannibals away, Shirley still wants to civilize them. 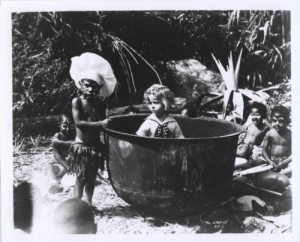 Kid in Africa from Miss Shirley Temple on Tumblr

There then is another clip that shows the “civilized cannibals” wearing grown up clothes that don’t fit. The cannibals have started using “milk pumps” to gain more energy. At the end of the Burlesk short video the Tarzan character says that he is thinking about going to play golf this afternoon. Shirley quickly response with a quick objection and that he needs to do the dishes. As Shirley and the Tarzan character are at their home, the Tarzan character wants to go out and play with his lion but sure enough Shirley objects. During that time period it could seem that a woman bossing the man around is considered funny. In our reading, Kasson says, “Shirley fought the Great Depression on a number of fronts can tell us much about the emotional demands of capitalist society during one of its greatest periods of crisis and the effects these demands had on children as well as adults” (126). Through this short video Shirley does an amazing job at performing in attempt to conduct herself as an adult. Throughout the whole short video there are depictions of adult behavior that supply comic relief. Even when Shirley exemplifies an adult there is still an innocent aura about her. This innocence about her, in the Burlesk short video, is what appeals to the audience during that time period. The childhood innocence that Shirley might not know nor understand what cannibalism is might give pleasure to adults due to the fact that it could be considered cute. The motive of the Burlesk video can be a way of cheering up the country from the depression. Kasson says, “Ultimately, the progressive forces of amusement triumph over the gloom and lift the country out of the Depression, emotionally and economically, but not without a struggle” (127). Even though these videos might be a source of amusement to adults during the period there poses a question of how the child actor might feel in these explicit roles that they play. Do the child actors understand the character they are playing? Do they understand what they are saying and portraying? These are the questions that Kasson addresses in the article, Behind Shirley Temples Smile, and I believe that in the Burlesk videos the child actors don’t understand what they are actually doing. The child actors are just doing what they are told to do. In defense, children understanding the actual message of these videos might corrupt their innocent thoughts, which would cause them to lose their whole innocent aura.