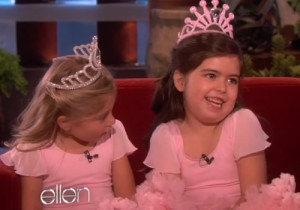 Sophia Grace is a vivacious eight year old little British girl who has brought laughs and entertainment to millions of YouTube viewers. Sophia got her big break with a video of her and her cousin, Rosie, singing to Nicki Minaj’s song “Super Bass”. Within days they became YouTube sensations. Their rendition of “Super Bass” gained so much popularity that the girls were asked to be on the Ellen show. The girls performed their version of “Super Bass” in their signature tiaras and pink tutus. Millions of viewers ate up the cute performance and wanted more. Ellen recently asked the girls to come back on the show and perform a new song for America. The girls sang “Turn My Swag On” by Keri Hilson who is a pop/R&B artist. Sophia even added her own rap to the song. After her performance Sophia received a standing ovation and Ellen even invited them to the Grammy Awards. While I do admit that I think these girls are adorable and their performances are funny, sometimes I question myself if this is appropriate for kids their ages to be singing. For example the lyrics to “Super Bass” have subject matter that deals with drugs, sex, and has vulgar language. The same subject matter is also present in Keri Hilson’s song that she preformed a couple of days ago. I have no idea if Sophia’s parents encourage her to sing these songs because they think it is entertaining to see little girls talk about grown up subject matter or if that is the type of music Sophia listens to. While Sophia and Rosie are not professional child actors like Shirley Temple, I feel they are exposed to some of the same situations. For example in class we watched one of Shirley Temple’s first movies where a bunch of babies were portraying grown up behaviors and situations for comedic relief. I feel that Sophia and Rosie are providing comedic relief to millions at their own expense because I don’t think they know what they are actually singing about. It is possible that as they grow older they can look back on their performances and possibly be embarrassed by the mature subject matter. The reading from Kasson about Shirley Temple also points out that Shirley’s parents were the ones who received most of Shirley’s hard earned money (136).  I feel Sophia’s situation can relate to Shirley’s because it is possible that her parents are reaping benefits off of Sophia’s instant fame.

Tags: children, entertainment, performing
From: In the News
No comments yet