Modern Family is a comedy sitcom that premiered on ABC in September of 2009. This mockumentary style series was created to appeal to the everyday American family by featuring three different families that can be characterized by modern-day circumstances. However, this past January, the show found itself in the midst of a controversy. Episode 13 of the show’s third season, titled ‘Little Bo Bleep’ was centered on one of the young daughters, Lily, learning and repeating the F-word.

Although the word was beeped out and her mouth was blurred each time she said the curse word, the episode drew negative attention from advocacy groups such as the Parents Television Council, which claimed that the show was exhibiting “poor taste” and a mild form of child abuse. The actors responded by saying that it was no way child abuse because the child actress actually said the word “fudge” during filming.

Reading these articles and watching this episode of Modern Family, I cannot help but relate it back to our class discussion of Shirley Temple. Many American viewers during the 1930’s were concerned that such a young girl such as Shirley Temple was being exposed to the actions and behaviors of adult women. The ‘War Babies’ 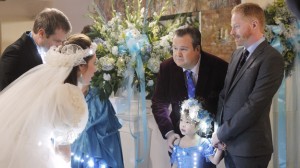 Lily and her fathers (Cameron and Mitchell) right after she says the F-Word during a wedding.

video clip that we watched during class showed very young children portraying the lives of young adults. While watching Shirley Temple in this video, I realized I had conflicting emotions about what I was seeing. A part of me was disturbed by the kissing and sexual innuendoes being expressed by the kids, but the other part of me was highly amused to see these children behaving like adults.

I experienced this same phenomenon while watching the ‘Little Bo Bleep’ episode of Modern Family. I thought it was absolutely hysterical to watch Lily say the F-word out loud, especially when she does it in the middle of a wedding. However, it does become uncomfortable when you think about such a young child actress being trained to say the curse word. In the end, I think it is absolutely ridiculous for the show to be criticized for this particular episode. Modern Family prides itself on presenting an accurate portrayal of all aspects of family life, and this situation is something many families can say they have experienced.In response to the child abuse accusations, if the young girl was indeed saying the word “fudge”, the show’s producers were in no way abusing the actress.

Tags: Childhood, Shirley Temple, Television
From: In the News
No comments yet