Colonel Mustard is a Bad Man 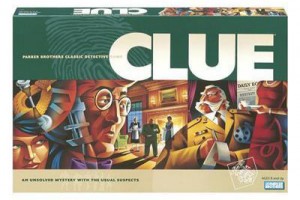 Board game "Clue" comes in a very suspicious box.

While reading The Ten-Cent Plague, by David Hajdu, a book about the scare that violent and gory comic books caused the parents in America, I began to think about toys in my childhood.  One game that really stood out to me was the game Clue by Hasbro toys.  Clue is a game where you have to figure out through the course of the game, who committed the murder, in what room, and with what object before your opponent could.  A little history of the game clue, it was invented in 1944 by Anthony E. Pratt who originally named it Cluedo.  But then in 1949 the Parker Brothers bought the rights to the game in the United States and renamed it just Clue.  The original cost of the game was just a couple of dollars, but now the remodeled game can go for over $20.

A sarcastic look at the Suspects of Clue, it consists of "Murderers"

Now this game has a lot to do with what Hajdu talks about in The Ten-Cent Plague, that comics are desensitizing the minds of children about violence and crime, and in some cases causes them to commit crimes themselves.  Hajdu writes, “fictional deeds of crime, bloodshed, lust, or immorality, which tend to incute minors to violent or depraved or immoral acts” (Hajdu 207).  While in the book Hajdu for the most part talks about comic books in the 1950s, it relates a lot to the game Clue and how it could have affected children who played the game.  John Locke talks a lot about the idea of a blank slate or tabula rasa in that what forms a child is what they grow up with and what they experience.  In the case of the game Clue, it can cause kids who have a very easily influenced mind, to start thinking about murder, or ways that someone might be murdered.  Instead of kids thinking about more educational games like Life or Uno, they are thinking about if Colonel Mustard committed the murder in the billiards room and whether he did it with the revolver or the candlestick.  In my case I don’t think playing the game Clue affected me at all, just like there were a lot of kids that weren’t affected by reading violent comic books.  But there is something to be said just about putting the thought or ideas in children’s minds, and John Locke’s tabula rasa.

So while Hajdu never talks about violent board games, his ideas about the “scare” also apply to Clue and the board games of my childhood.  So next time you see a kid playing Clue, or even playing a game like operation, know that we’ve been through this once before, and David Hajdu might just have a lot to say about the

Tags: Childhood, Games, Violence
From: Archive of Childhood
No comments yet