Power Rangers for Everyone 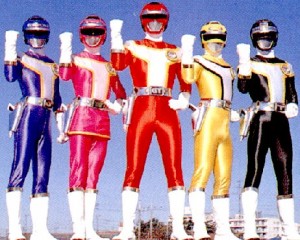 One of my favorite T.V. shows throughout my childhood was the Power Rangers. The series started in 1993 and shortly after become a nationwide phenomenon with many different toys and costumes for children. It started as a series in Japan and Americans then adapted in in 1993 to become a show on the Fox network. It has many different series that have played throughout the years but they all revolve around the same concept. Power Rangers is a superhero show that consists of a few young normal people who are trained to become super heros and fight villains. They transform and fight as a team wearing suits and helmets. For 3 years in a row I dressed as the pink Power Ranger for halloween and many other kids I know would dress up as Power Rangers and we would play fight at the playground. The costumes range in price from around $20-30.

The Power Rangers became a huge pop culture icon throughout the 1990’s. In class discussion, we tried to define pop culture and what can be classified as pop culture. I think pop culture can be different depending upon where you live and the society you are in, but is something that a large majority of people can identify with. The creators of Power Rangers were very smart when trying to decide how to target a broad range of children. By creating characters that appeal to both girls and boys the target market can double. If you look at a lot of toys or television shows geared for children they typically tend to appeal towards one gender or the other. Power Rangers used color and characters to appeal to both. Power Rangers was a big part of my childhood and created unity on the playground for boys and girls alike to wear their different costumes to school and fight the villains of the playground.