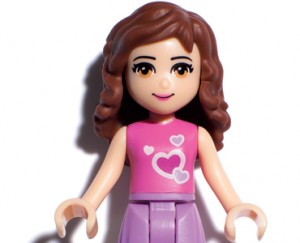 I slumped down to the floor, pulling my favorite move, “no bones”. I kicked my feet, and slammed my fists into anyone who came at me with the giant ruffly puff of fabric.

The wedding was delayed by an hour.

I was an eight year old girl, whose girl friends played with barbies and their mother’s high heels, while I through my barbies into the fan and chose the woods with the boys instead.

Even with all the progress in equality for race, sex and orientation, there are still gender roles that play a big part in raising a child. It is seen everywhere, Disney princesses, Comic Book movies and now even Legos.

With the release of Lego’s new “Lego Friends”, came a backlash of 50,000 petitioners saying enough is enough.

A letter from Callie the ten year old daughter of Melissa Wardy, who started the Pigtail Pals clothing line directed towards breaking the gender role standards, states “There are plenty of smart and creative girls out there eager to play with Legos. Do you want that to be ruined, by giving th

em only a beauty salon to create?”

As a former tom boy, who still plays with my brother’s Star Wars lego set, the idea of distinguishing a difference between the “boy” and “girl” way to play with what are basically glorified building blocks with endless possibilities is RIDICULOUS.

Tags: gender, Legos, toys
From: In the News, Other
No comments yet