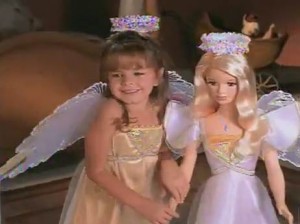 Growing up I would have to say one of my favorite toys was the My Size Barbie. My parents bought me my first one for my birthday when I was around five or six. I named her Kimberly after the Pink Power Ranger and I played with her practically everyday. Like normal size Barbies, My Size Barbie was produced by Mattel. Now I didn’t play with Kimberly the way that Mattel probably envisioned for little girls. I would play gymnastics with her and I eventually broke one of her legs off. My parents sent her back and I got another one and still played with her rather roughly. I tried researching when the first My Size Barbie came out but I could not find the exact year. However I ran into some people selling their My Size Barbies dating back to as early as 1992. My Size Barbie was 36 inches tall and came with two outfits so the little girl and Barbie could wear and trade outfits. Mattel no longer makes My Size Barbie so I am not aware of the exact prices especially during the nineties. On eBay currently they range from $70-$200 depending on the model. Growing up I was not aware of the gender roles and stereotypes that My Size Barbie was pushing on little girls, which is probably why I played with Kimberly so unconventionally. Barbie was and still is the icon for what the “ideal woman” should be, which is beautiful, skinny, social, and mainly just concerned with her image and nothing else. As Gary Cross points out, toys throughout the centuries have been made to reflect “conventional work roles” for both girl and boy toys (Cross 49). Cross also states that the rise of dolls for girls to play with happened due to families having less children which resulted in doll play that taught “child-care skills necessary for future maternal roles” (Cross 54). Almost all my friends who were girls growing up had a My Size Barbie  and whenever they played with her they would either be princesses or mothers. In conclusion gender stereotyping of toys may not effect every child in the same way, but they continue to instill the mainstream social constructs of gender.

Tags: Dolls, gender, Modern toys
From: Archive of Childhood
No comments yet