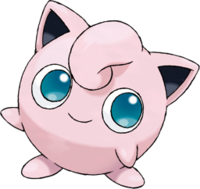 The pink, temperamental Pokémon character I identified with most as a child

As a child I wanted to do everything my brother did, including playing the video games, watching the TV show, collecting the cards and obsessing over the movies/stuffed animals/anything relative to Pokémon. I obviously was not interested in the “supposed different interest of girls and boys.” (Course packet page 69) It was a boy’s game that I did not openly admit to liking, however my parents never denied me the joy of playing. They actually were all for this considering my brother and I fought like cats and dogs. Our bond in Pokémon would temporarily control the madness and entertain both of us at the same time; they saw no problem with killing two birds with one stone. Like many parents they were concerned “about whether their children were being entertained enough.” (Course packet page 6)

“Pokémon was launched in Japan in 1996 and today is one of the most popular children’s entertainment properties in the world…” earning the second spot in top game franchises. Pokémon was originally intended to be a video game and therefore is affiliated with Nintendo, however it has spread into a plethora of products not necessarily centered around video games.

Their products range in price depending on what exactly you want; As far as games go, the Pokémon games for the Nintendo DS run a little under $40. Right now on Amazon a Pokémon videogame for a gaming consul costs almost $100. 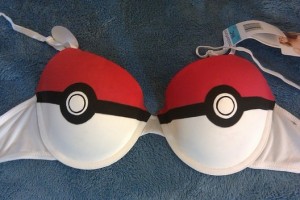 "This one’s for the ladies in the house (or dudes if you’re into it, Pokébra judges no gender!), these adorable bras are custom made, meaning every boobie of every size can be successfully captured by this nerdiness. It’s a shame that during all his years on the air in prepubescent purgatory Ash was never old enough to touch a boob. I’m pretty sure a bra like this would have made his awkward teenage years more memorable."

When I decided to write about Pokémon I had a conversation with a friend about the topic. I was having trouble remembering the name of my favorite Pokémon character. I knew it was pink and temperamental; finally the name came to me, Jigglypuff! There are some ridiculous Pokémon products that have emerged and are for sale right now. These products include a Pokébra, Pokémon Jets, Pokéball Beret, Yellow Pikachu Lightning Nike Sneakers, PokéDex iPhone Case, Pikachu Boxers and more. I thought that it would be a difficult topic to write on since it had been so long since I had been a Pokémon fanatic. I was proven wrong with my first Google search. I have learned that although I eventually grew out of that awkward stage of my life, it seems as though others continue to dwell in this fantasy.

Tags: anxious parents, children, consumption, gender
From: Archive of Childhood
No comments yet