Cubby House Made of Blankets and Hand Me Down Toys

As a child growing up in a lower- middle class Mexican American family I quickly learned that the expensive and popular toys from televised commercials and magazines were rarely in our reach. From the readings in this course thus far, I find the arguments and excerpts to be guided towards an upper class audience.  The first reading was a chapter by Peter Stearns entitled “Anxious Parents: A 20th Century History,” outlining anxieties by parents to keep their children happily entertained. Stearns argues that to keep anxieties low parents would compromise boredom for the newest toys, summer camps, and even family vacations. I never attended camp during the summer and I can only remember taking one family vacation. The popular toys my siblings and I played with were usually hand me downs given to my mom from people she worked for. This is not to say that I had a sad, boring childhood.  My memories of growing up are filled with fun and crazy stories about building “club houses” out of blankets and playing hide and seek until it was dark out. I even remember having a blast taking turns pushing each other around in a battery operated pink corvette that was given to us without the battery. 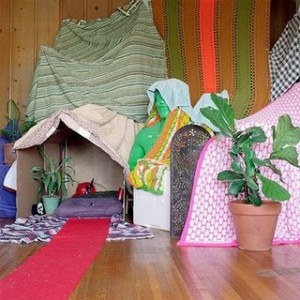 Club house made of covers

As a child it never seemed to matter to me what I was playing with, as long as I was playing I was having fun.  I grew up in a household where parental anxieties were based around paying bills and putting food on the table rather than worrying about my siblings and I being bored. Because of this, I find that not only the issue of “parental anxieties” to be based on socioeconomic status but also the idea of gender favored toys and their regulation by parents explained in “Modern Childhood, Modern Toys”  by Gary Cross to rarely apply to lower income families.

There is a short story  titled “Barbie-Q” by a well known writer/poet named Sandra Cisneros that I believe has a strong connection to my post. You can read the short story by clicking the pdf link below.