According to the article New Legos Aimed at Girls Raise Questions (Chris O’Brien, San Jose Mercury News, Jan. 2012), Lego brand has introduced a new line of products, Lego Friends, that is directed towards girls. While Lego’s products have remained general neutral in the past, they have always appealed to more male consumers than females. However, the company decided to veer toward products that would attract more boys, such as fantasy and escapist based kits, when sales began to drop a few years ago. Recently, Lego has been working on putting out a product directed towards girls. After conducting a study to see what girls like in toys, they discovered that girls prefer a more “reality-based” toy that creates a setting in which they can see themselves as the characters. Though the author does agree that his daughter is interested in the Lego Friends line, he ultimately argues that she, along with other girls, are happy with the traditional product lines that Lego has to offer. 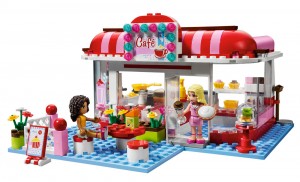 While this product has great potential to boost Lego sales, the company made several errors when designing the product, each of which involves gender roles, which we have discussed during multiple lectures over the course of the semester. First, Lego made the bodies of the girls different from the traditional, bulky build of the classic Lego person. The figure on these girls shows a thin waste as well as breasts on the figure. Some argue that this will lead to an increase in lower self-confidence in girls. Also, the Lego Friends line includes a cafe and beauty parlor, which goes back to the traditional female stereotype of women centering life around cooking while simultaneously maintaining good looks. John Baichtal, co-author of the recent book, The Cult of LEGO, thinks there is still time to improve the product line and suggests adding more professions, such as science and technology professions. Finally, the Lego Friends kits require a significant amount of less building than the previous Lego kits. This causes the consumer to wonder if Lego felt they needed to dumb down the product for a girl product, which does not please the consumer.

This article clearly relates to multiple class discussions we have had as it focuses on the gender roles that toy makers place on their products and how the consumers view the products. While the company may be doing what it thinks will boost their sales, they often lose sight of what exactly they are marketing and turn to the classic stereotypes. Likewise, as companies begin to put out these products, some of the consumers (in this case, the parents) will buy into the product as that they believe will be “normal” for the gender of their child based on previously established gender roles.

Tags: children, gender, toys
From: In the News
No comments yet