Shower them with Nikon, Xbox, PlayStation and Kindle

In Gary Cross’ article Modern Childhood, Modern Toys he draws connections to Christmas and the meaning of Santa Claus. In the times after the Civil War, toys and play became a more prominent aspect of children and their developing childhoods. When Christmas was finally recognized as a true holiday, parents began to shower their children with gifts, not to secure loyalty or represent any power differential, but to strengthen the “emotional ties within the nuclear family” (Cross, 59). As the toy manufacturing companies began producing more and more toys, the original idea of toys being handmade and born from the heart started to fade, thus the idea of Santa Claus came to be. Children would write to Santa in the North Pole with their Christmas wish list and parents would go to seek the gifts the children asked for, only if the children’s behavior had been good. 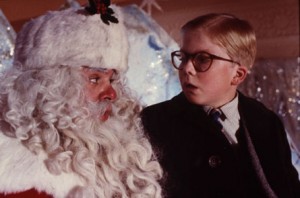 From the movie A Christmas Story: a childhood favorite that depicts the spirit of Christmas for a young boy.

In our current society, much emphasis has been placed on electronic gadgets rather than the traditional knitted sweater from Grandma or handmade wooden trinket from Dad. Instead of transformers and comic books, little boys wish for Nintendo DS’ or an Xbox. Nevertheless, gifts have grown increasingly expensive and a strain has been placed on parents to provide their children with the perfect Christmas. Cross explains this strain as “Parents teach their children to believe that Santa will bring them heaps of toys which no one had to sacrifice or even pay for.” (Cross, 60) While a parent may be able to afford the Xbox 360, the games that accompany the console are still very pricey. In present day, a family’s wealth may be depicted by how many of these new era gifts are given at Christmas time. While the parents are not purchasing the gifts for themselves, or showing off their wealth in prestigious vehicles, all of the newly expensive Christmas presents will speak loud enough for that family’s status. In the commercials that air in preparation of Christmas, many of them this last year especially started to show mother’s (in particular) developing an obsession with purchasing everything they could without facing bankruptcy in order to provide their children with that perfect Christmas experience.

Some commercials went as far as to show mother’s competing with the made-up character Santa Claus, to prove that they no longer needed him to make their children happy. With all the discounts that stores give on the expensive presents, they could do it themselves. This commercial in particular shows the mother buying the fun, cool and most modern electronic gifts while Santa is trying to fit in a small wooden truck, that looks like it would have made a little boys day 60 years ago.