From as far back as I can remember, I have always had a love for video games. My earliest memories of video games are of my sisters and I playing Mario World on the Super Nintendo. Almost all of the games my sisters and I owned were Mario games for the Super Nintendo and Nintendo 64. Then, the PlayStation was released. Because Mario was a Nintendo franchise, I began to play other, more challenging games. One of the first PlayStation games I owned was Tomb Raider: The Last Revelation. Tomb Raider: The Last Revelation was developed by Core Design Ltd. and published by Eidos Interactive, Inc. in 1999 for PC, PlayStation, and later Sega Dreamcast. This action and puzzle-solving game, set mainly in Egypt, presents Lara Croft, tomb raider, who, after uncovering a lost tomb and unwittingly releasing the ancient god Set, must do whatever it takes to reimprison Set and save the world from total annihilation while also being pursued by her arch-rival, archaeologist Werner Von Croy.

While I enjoyed the adventure and puzzle-solving aspect of this game, perhaps the aspect I loved most about Tomb Raider was the fact that the main character of the game was a female. In video games especially, it is rare to see this. However, when I grew older I realized that, while the main character is indeed a girl, she is obviously sexualized. In the game, Lara Croft has a ridiculously proportioned body, with her hips and breasts being way bigger than the rest of her body. She is seen multiple times in the game wearing clothing that is way too small for her and also climbing and sliding down poles that just happen to be in the tombs. While reading David Hajdu’s The Ten-Cent Plague: The Great Comic Book Scare and How It Changed America, I couldn’t help but relate the comic books that portrayed women with poorly proportioned bodies in skimpy clothes to Lara Croft, because it is essentially the same thing. This is especially true with comics like Wonder Woman, in which the story line revolves around a dominant heroine saving the world. However, even though these types of comics books can almost be directly related in terms of content to this game, Tomb Raider: The Last Revelation faced a significantly less controversy than the comic books, which shows how society’s views on pop culture have changed over the past fifty years. 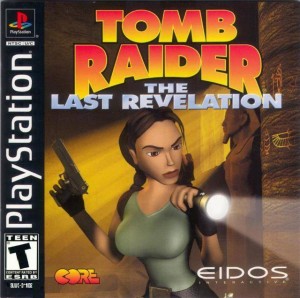