A Doll for a Twin 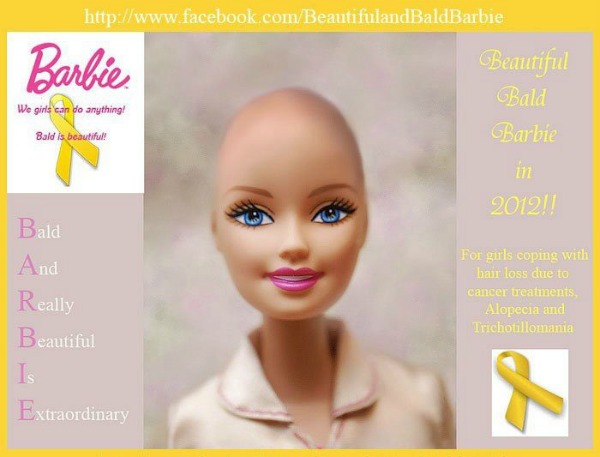 This is the image used on the Facebook page "Beautiful and Bald Barbie! Let's see if we can get it made", which campaigned for the creation of a bald Barbie.

Mattel very recently announced on Facebook their newest project, bald Barbie. Referred to as a “fashion doll”, Mattel’s decision to create this new doll was prompted by a Facebook campaign. With over 150,000 “likes”, the Facebook campaign was started by two mothers who called for the creation of a hairless Barbie (http://blogs.babble.com/family-style/2012/03/28/finally-barbie-is-going-bald/). The mothers’ intentions were for this doll to serve as a coping device for young girls with and/or exposed to hair loss that was brought on by some illness. Mattel stated that accessories for the doll, such as: “wigs, hats, scarves and other fashion accessories” (https://www.facebook.com/Mattel?sk=wall), will be offered in order to ensure equality in play with both bald Barbies and traditional Barbies.  Additionally, Mattel will not be putting this new doll on the shelf; rather, they will donate the dolls to children’s hospitals in order to ensure that those children who need these dolls most will get them.

Mattel stated in their post: “Play is vital for children, especially during difficult times” (https://www.facebook.com/Mattel?sk=wall). The plea made by the mothers on Facebook along with Mattel’s decision to submit to these mothers’ requests shows the importance these groups place on play, doll play in particular, and their belief in play’s therapeutic capabilities. The significance of dolls is also noted in Chin’s chapter: “Ethnically Correct Dolls: Toying with the Race Industry”. In this chapter, Chin discusses the makers’ of ethnically correct dolls strong feelings about girls, specifically African American girls, having dolls to play with that resemble them. Chin states the makers’ intention for creating these dolls, she writes: “Ethnically correct dolls(‘)…purpose is to make kids feel better about themselves as they play with toys that look like them” (359). The ethnically correct doll manufacturers’ objective is to build self-esteem amongst African American girls; they believe that black children playing with white dolls endangers these black children’s self-concept. The driving force behind the creation of ethnically correct dolls and the soon to come bald Barbies is this idea that children need to relate to their doll, mostly in regards to appearance, in order to experience the full benefits of play. The Facebook petition page states: “This would be a great coping mechanism for young girls dealing with hair loss themselves or a loved one” (https://www.facebook.com/BeautifulandBaldBarbie). The hope is that Mattel’s new doll will help boost the self-esteem of children undergoing hair loss, and “bring joy to children who need it most” (https://www.facebook.com/Mattel?sk=wall).

A disparity that exists between ethnically correct dolls and Mattel’s bald Barbies is the rate at which these dolls are obtained by the children who need them most. As noted above, Mattel plans to distribute their new dolls to children’s hospitals, easing the burden of these children in need from having to seek out and purchase these dolls. In contrast to Mattel, manufacturers of ethnically correct dolls, such as OLMEC, are looking to make money. If you cannot afford or lack access to a store that sells these dolls, you are unfortunately out of luck. This was the case for most of the African American Newhallville children Chin worked with. The Newhallville children appeared to manage just fine with their white-skinned dolls, but this is beside the point. In the minds of the makers of ethnically correct dolls, Newhallville children and other children in similar positions are the kids most in need of these dolls, yet they happen to be the children most deprived of them.

Whether or not one believes that children need to physically look like their doll in order to experience play’s full effect, the bottom line is that dolls are an extremely important and beneficial component of play. All children deserve to possess a doll that brings them the utmost comfort and joy.