Just Another Piece of Meat 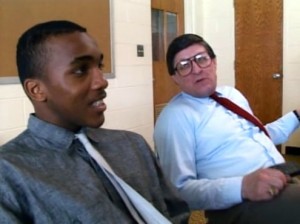 In the movie “Hoop Dreams” filmmaker Steve James made it clear that a lot of what happened in William and Arthur’s lives had nothing to do with them, but rather their path was chosen for them by external factors.  Proof of this lies with one specific instance at the beginning of the movie where talent scout Earl Smith is scouting 8th graders for the basketball team at St. Josephs in Chicago.  In the movie they focus on Smith and his interaction with Arthur but James also stated in the movie that Smith did the recruiting of William.  In this scene Smith is telling Arthur why he should be going to St. Joseph’s and why that decision is the best one if Arthur wants to go to a good college and ultimately end up in the NBA.  Arthur doesn’t realize that Smith is not doing this for the good of Arthur, but rather he wants Arthur to go to St. Joseph’s to increase his recruiting profile and look better for the coach.  Once Arthur gets to St. Joseph’s he loses all contact with Smith (until his last game as a Senior with Marshall High School) and feels like he got taken advantage of.

So the question here is, is this what filmmaker Steve James wanted us to feel as an audience?  Did he want us to feel that Arthur was forced into this decision of attending St. Joseph’s not knowing what was lying ahead?  The answer to me is yes.  It became obvious throughout the movie that Steve James wanted to show how coaches and scouts take advantage of inner city kids and their “dream” of making it out of the ghetto.  They know that these kids want to hear how they can make it to the NBA and that is what the coaches tell them.  So, while Arthur was old enough to make a decision about whether or not to go to public school or to attend St. Joseph’s, Steve James made it clear that he was more or less pushed down the route to St. Joseph’s because of the deceitfulness of the scouts and the way they took advantage of Arthur’s “dream”.

I believe that James was not just trying to show how scouts and coaches drive the lives of young players, but also that recruiting in itself needs to be limited.  He talks about how when Smith went to the playground to scout Arthur how he was looking at 8th Graders like pieces of meat.  When you chose to recruit like this rather than looking at everything in a player’s life, the result is what happened in “Hoop Dreams,” and that is scouts and coaches running the life of a player as if they have no life other than basketball.  Steve James did a great job of letting the truth out about high school basketball and the ethics that are involved in recruiting.  He did so by showing the negative sides of recruiting, and in this unfortunate case the consequences that occur when a player like Arthur Agee let scouts and coaches make the majority of the decisions in his life.