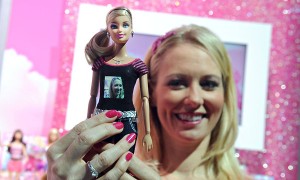 A button on Barbie Photo Fashion's belt is pressed to take a picture that appears on her shirt, which can then be downloaded to a computer.

The New York Times article “Go Directly, Digitally to Jail? Classic Toys Learn New Clicks” by Stephanie Clifford follows the progression of what used to be simple toys, and their journey through the technologically enhanced world.

Following the American timeline through today, parents have been put under increased pressure to keep their children entertained and therefore “entertainment standards went up accordingly.” (Stearns 5) Toy companies have taken advantage of the technology boom and created a world where “Kids like to play with the gadgets that they see their parents using” according to John Alteio, director of toys and games for Amazon. Toy manufacturers are aware that kids will inevitably be playing with technology and have decided their “job is to not necessarily avoid that, but if you can’t fix it, feature it.”

Barbie Dolls used to “represent a free-spirited teenager, she enticed girls to emulate her style,” (Chudacoff 173) but has evolved into a doll (if you can even call her that) with less meaning and more function. One of the newest Barbie “Dolls” Clifford describes has “a lens in her back; children point the doll at an image, and press a button on Barbie’s belt to take a photo. The image then appears on the front of Barbie’s T-shirt.”

Typically games like Monopoly that were usually played without technology are now played on iPads. Technology has transformed the world of games that previously existed. However now a different phenomenon has emerged. The technology-based game comes first and stuffed animals follow – a different nontraditional way to make even more money.  Clifford sites the “Moshi Monsters, which started out as an online-only game, started selling plush toys.”

“Low-income families were unlikely to have downloaded apps for their children’s toys, for instance, which many of the new toys require,” according to the Common Sense Study. The iPhone and its apps have become the new version of the American Girl series. An American Girl “combination of doll, book and accessories for just one character sold from around $100.” (Chudacoff 185) Both examples are pointing to the inevitable truth that entertaining children to such an extent will only increase the material gap between children.

Julia Johnson argues that “You definitely lose out not having board games be the way they used to…” I would argue that just because it is different isn’t necessarily bad, however toys such as Barbie has lost its original intent and devices like the iPhone are creating a separated society, starting at a very young age.