When I was about 4 years old, I received a set of glitter crayons from my friend Robbie in a pre-school class gift exchange. This may have changed the course of my life forever. That sounds dramatic, but my parents swear that glitter crayons were my entrance into the world of picture-making. Before, I only did indiscriminate scribble drawings, but after I got glitter crayons, I started making pictures. I had long explanations of what was happening in each drawing, which my mom dutifully inscribed on the back of the drawing. What was it about glitter crayons that attracted me so much? Well, the glitter, obviously. For kids (or at least for me), it heightens crayons from everyday color-making tools to a world of magical sparkling colors. 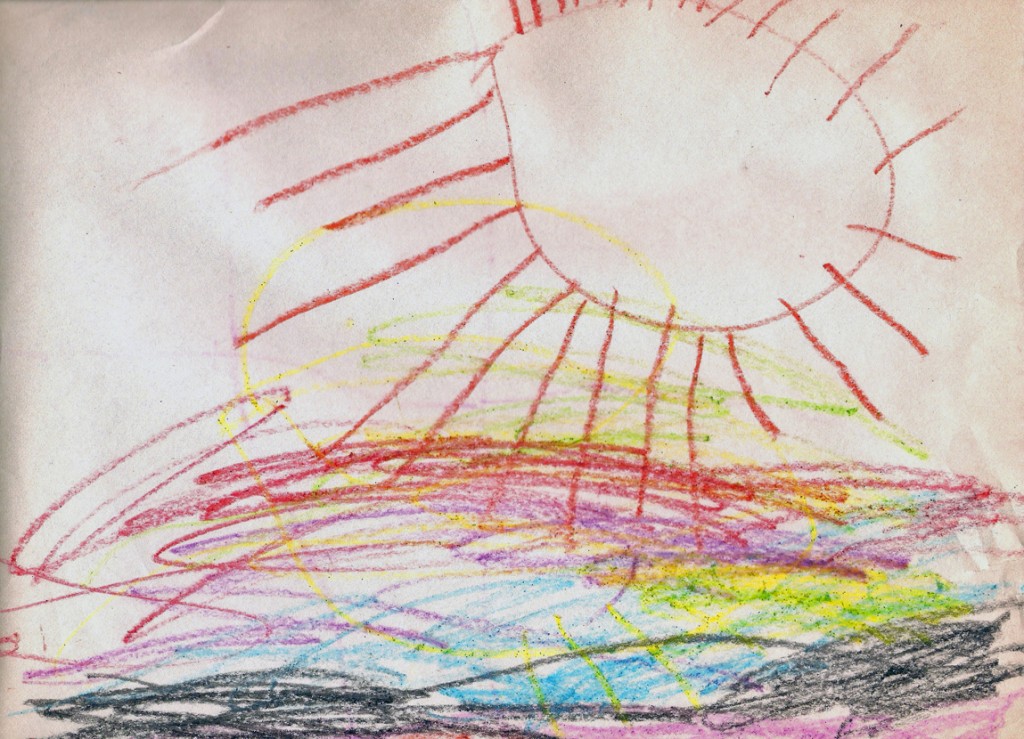 With the glitter crayons, which were a novel item in the early nineties, I was inspired to create drawings as often as possible. Because of my newfound interest in art at age four, my mom signed me up for a parent-child art class at a local art museum one summer, and since that class, art has been a passion of mine.

Crayons in general are very important objects of childhood. Crayons are made specifically for children, and after childhood most people rarely use crayons. They are not regarded as a high art medium, although they have been used by a few artists in amazing ways. I think that crayons have impacted most of us more than we know, in how we think about, describe, and differentiate colors. Given to us by our parents as a non-toxic and easily removable medium to keep us busy, crayons are more than just that; they are generally our first experience in using color on our own. 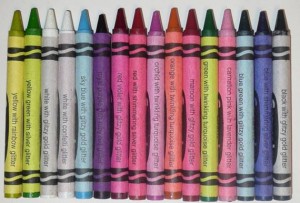 “At Crayola, we are all about kids. Kids inspire us, our work, our products, our offices, and our culture. Our kid-inspired culture defines who we are and how we act, which enables us to be creative and allows us to think like the kids we delight everyday.”

Crayola was founded in 1885 as a company called Binney & Smith. In the first few years of the 20th century, they produced slate pencils and invented a dustless chalk to be used in schools which was extremely successful. In 1903 they came out with the first set of crayons under the name Crayola, an eight pack which sold for 5 cents. The name “crayola” came from “craie”, the French word for “chalk”,  and “ola” from “oleaginous” (oily/greasy).  According to crayoncollecting.com, glitter crayons were first released in 1993 (when I was 2 years old).

The idea of crayons as a childhood item connects directly to the course readings by Peter Stearns and Gary Cross. In the 20th century, when parents were more anxious about the development of the child and methods of parenting, “an array of new consumer products was aimed at children” (Stearns 3). Crayons are wholly an item of this 20th century phenomenon as they emerged on the market at the very beginning of the century and are still very popular today. It is also apparent in the above statement from Crayola’s website that they are completely marketing to kids.  Also, because of a “sense of responsibility for providing fun” (Stearns 5), these new consumer products were widely purchased by parents in the 20th century. Also, “a crucial shift involved consumer items for very young children” and “this new consumer practice both reflected and encouraged further commitments to the use of commercial toys to provide childhood pleasure” (Stearns 7). Crayons are commercially produced items that provide childhood pleasure; most people look back on crayons with some sense of nostalgia. The idea that “home should become an entertainment center of sorts” (Stearns pg8) emerged in this time, and Crayons were a way of keeping children entertained and busy. If one views crayons as a type of toy, one might think of them in terms of Gary Cross’s article in which he states that “playthings through the ages have served common purposes in introducing the young to the tools, experiences, and even emotional lives of their parents. But only in modern times have toys become primarily objects for children, props in a play world separated from adults” (Cross 44).