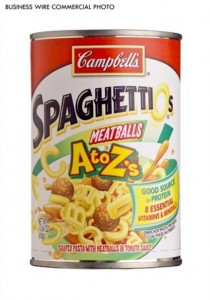 Spaghetti-O’s are a canned, sweetened circular shaped pasta mixed with tomato sauce, cheese and, sometimes, hot dogs. They were introduced in 1965 by Campbell’s and are advertised to parents as being the “less messy version of spaghetti”. I fondly remember scarfing down a ridiculous number of cans of Spaghetti-O’s when I was younger. It definitely lived up to the expectation that it was quick and easy. When they were first released, one 15oz can contains 22g of sugar, 1200mg of salt, 70g of carbohydrates, 12g of protein and 340 calories. Campbell’s has since slightly improved the health content but they are still, by no means, healthy as it is advertised. The can actually states that it is “Healthy Kids Entrée.” To start with, one serving contains 600 mg of Sodium which is near 25% the daily recommended value. It also had 11 grams of added sugar in the tomato sauce in the form of high fructose corn syrup.

Needless to say, I wouldn’t agree that this is something that should be advertised to be eaten in place of a healthy, well-balanced meal. Although Campbell’s has made improvements and it is not quite as bad as it was to begin with, the advertising is what really strikes me. They seemed to focus more on additional products geared towards children more so than the Spaghetti-O’s themselves.

These are Spaghetti-O’s commercials but seem to be resting on advertising other things such as Gargoyles and Sonic the Hedgehog. It seems as though they are relying on children’s love for certain toys to push their own product as well as push secondary merchandise on children. When I saw these commercials, I was so focused on how cool the Gargoyle tattoos were, I hardly even heard the details about the Spaghetti-O’s, I just knew I had to have them!